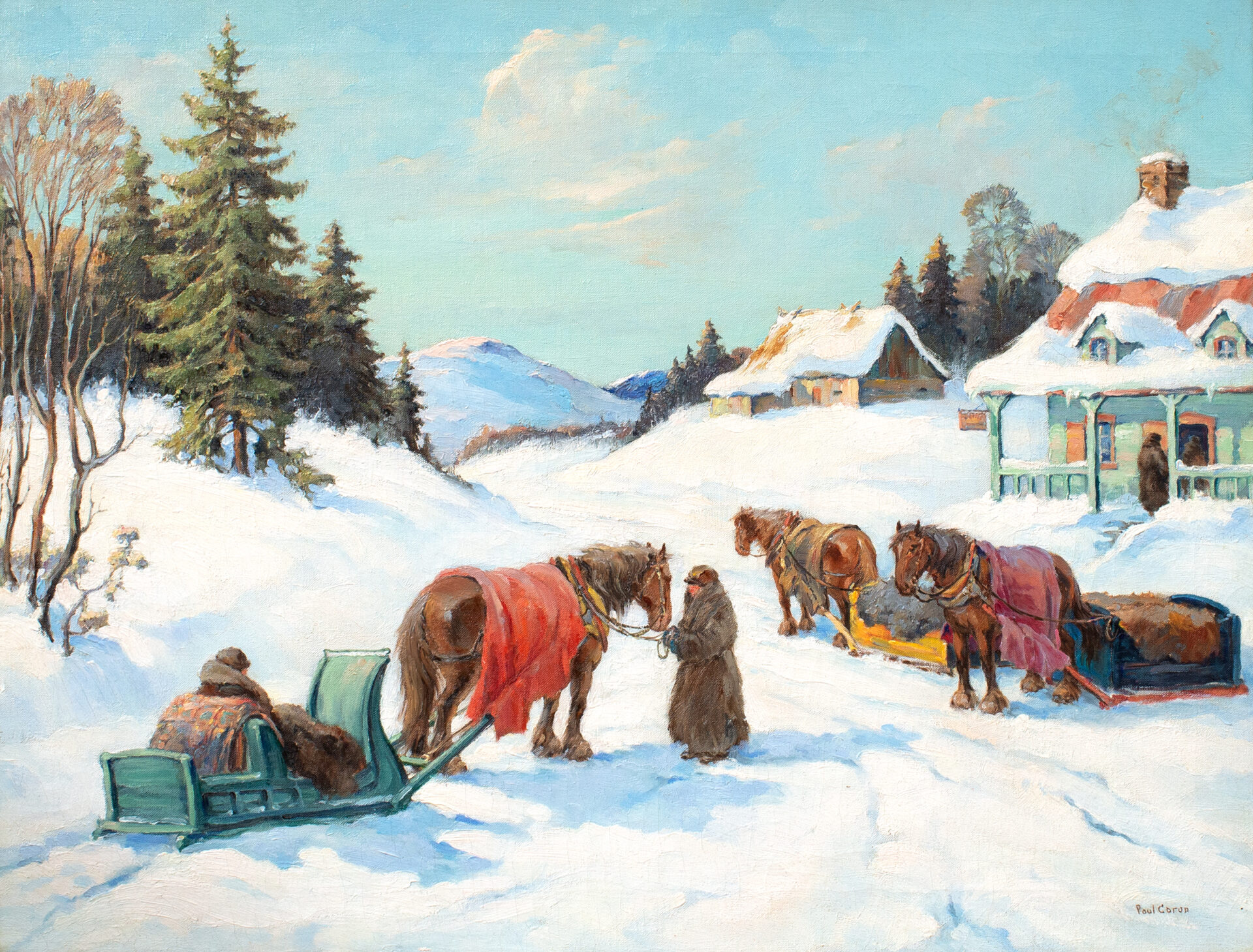 It is no surprise when we look at the brilliantly coloured works of Paul Caron, to find that he began his career as an ornamental stained glass designer. His works, laden with snow as we see here, seem lit from behind with a brilliant, clear light. Having studied with the auspicious teachers William Brymner and Edmond Dyonette at the Art Association of Montreal, he also worked as an illustrator, a common practice at a time when making a living, supporting oneself and one’s family from painting, was a precarious practice. Scenes with the subject we see here are a staple in Caron’s body of work; families loading sleighs, at crossroads travelling, and plodding through impossibly deep and deliciously white snow, with blue sleighs and red blankets contrasting brightly to the snow. Caron’s shadows on snow are visually pleasing as well as informative, they tell us the snow’s depth, is crispness or wetness, its age, or its newness. To be a landscape painter in Canada, an understanding of snow is a must, and Caron was particularly skilled in blending white with a subtle yet vast array of colours to convey a myriad of different information to us. Thus, it is also no surprise that his wintry works were very popular as Christmas card illustrations, conveying as they do, the bright beautiful whites of winter.

Born in Montreal, Quebec, he studied drawing and painting under William Brymner, Maurice Cullen and Edmond Dyonnet at the school of the Art Association of Montreal. He worked 11 years in the stained glass industry making drawings for ornaments and figures and then for La Presse and the Montreal Star…

Born in Montreal, Quebec, he studied drawing and painting under William Brymner, Maurice Cullen and Edmond Dyonnet at the school of the Art Association of Montreal. He worked 11 years in the stained glass industry making drawings for ornaments and figures and then for La Presse and the Montreal Star doing pen and ink drawings. He was a designer and illustrator for magazines but eventually turned to full time painting particularly of old buildings and ancient areas of Montreal and Quebec City. He favoured winterscapes and painted many rural scenes in the Laurentians of which several were reproduced on Christmas cards. He worked in watercolour using only distilled water and took great care in the selection of his materials to insure permanency. He exhibited with the Royal Canadian Academy and the spring shows of the Art Association of Montreal; Ontario Society of Artists, and the Fine Arts Section of the Canadian National Exhibition. He won the Jessie Dow award prize for watercolours in 1931 and 1937. His works are in the collection of the National Gallery of Canada and the Museum of the Province of Quebec. He was member of the Pen and Pencil Club, Montreal; The Arts and Letters Club, Montreal; The Canadian Society of Painter-Etchers and Engravers; The Canadian Society of Graphic Art; and the Royal Canadian Academy (A.R.C.A. 1939). His works were shown at the Galerie l’Art Francais, Laurier Avenue, Ottawa, and the Stevens Art Gallery on Drummond Street, Montreal. He is represented in the collection of the National Gallery of Canada by one of his Montreal street scenes. Four of his beautiful oils decorated Blodwen Davies’ Saguenay. [1] [1] Colin S. MacDonald, A Dictionary of Canadian Artists Vol. I, (Canadian Paperbacks Publishing Ltd., Ottawa, 1967): p.118.