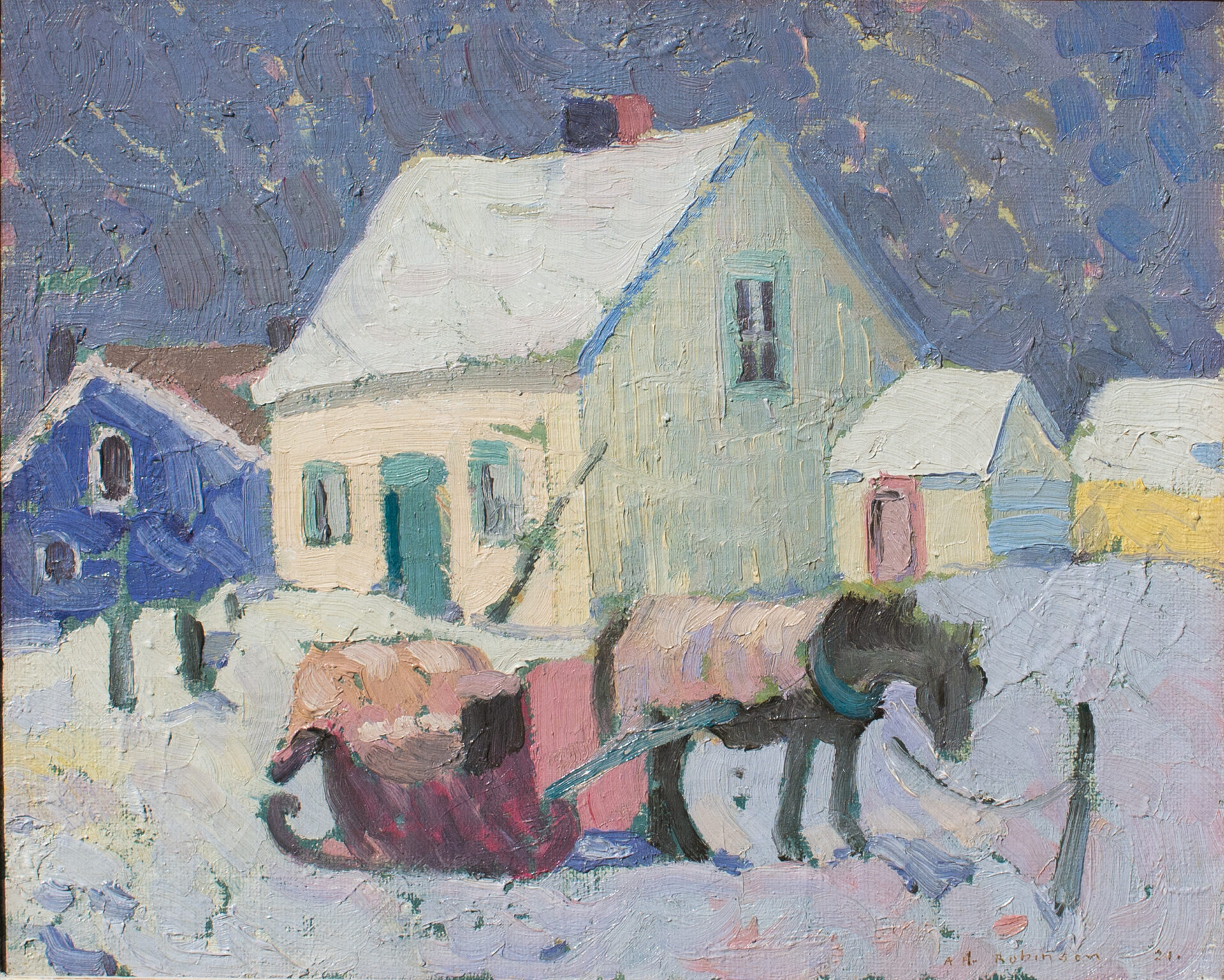 This delightful Albert Robinson from 1921 depicts his favourite season of winter, wherein a somewhat dejected horse waits for the absent occupants of the raspberry-coloured sleigh to return after their time in a store. Robinson was a keen observer of winter, aided and supported in challenging pursuit by his sketching companion and fellow winter-lover A.Y. Jackson. They would work together, out-of-doors, in all kinds of winter weather, depicting the St. Lawrence and the villages along its banks in storms, on sunlit winter days, and blanketed in ice. Robinson and Jackson took a sketching trip together to France in 1910, where their ideas of colour and light were set afire by the French avant-garde of the time: Impressionism. As one of the most influential movements on modern painting, Impressionism changed the way we see the world, and Robinson returned to Canada, to see our landscape with new eyes. And through a new range of colours. Jackson’s influence, along with that of James Wilson Morrice can be seen in Robinson’s work, but his palette is all his own. Art historian Joan Murray wrote that he introduced Canadians to “…an unusual colour element – pinks, corals, dark blue. His skies are coloured boldly and unrealistically like a stage-set backdrop. And he orchestrated the effect of space. He was concerned throughout his painting career, short as it was, with the creation of a more simplified, powerful form – he wanted to eliminate the trivial.”

1881-1956 Albert Henry Robinson was a native Hamiltonian who studied with John S. Gordon during the evenings and worked for the Hamilton Times as a chalk plate artist during the day. In 1903, he left for Paris and continued his training at the Julian Academy with Bouguereau and Bachet, and…

Albert Henry Robinson was a native Hamiltonian who studied with John S. Gordon during the evenings and worked for the Hamilton Times as a chalk plate artist during the day. In 1903, he left for Paris and continued his training at the Julian Academy with Bouguereau and Bachet, and then with Ferrier at the École des Beaux-Arts. Robinson was greatly influenced by the impressionists and remarked years later that they had ” their eyes open spiritually.” After returning to Hamilton, John S. Gordon hired him as an assistant and then as an instructor at the Hamilton Art School. In 1906 Robinson sold his first piece of work at a three-man exhibition organized by Harry Neyland , but the real turning point in his career occurred in 1908 when Robinson met a Montreal couple, visiting in Hamilton. The Davis’s recognized his talent and encouraged him to come to Montreal declaring that, “Albert won’t amount to a hill of beans here.” They introduced him to many great artists of the day including A.Y. Jackson who became a close friend, and they continued to support and sponsor him throughout his career.

The two artists went on many sketching trips together and between 1918 and 1933, they travelled along the shores of the St. Lawrence and in the Laurentians, where Robinson painted many landscapes, which constitute the bulk of his work.”Robinson’s fame rests today on his oils which record the Quebec countryside. He painted snowbound villages, floating ice in springtime rivers, and the quiet summer valleys and hillsides in the Eastern Townships”