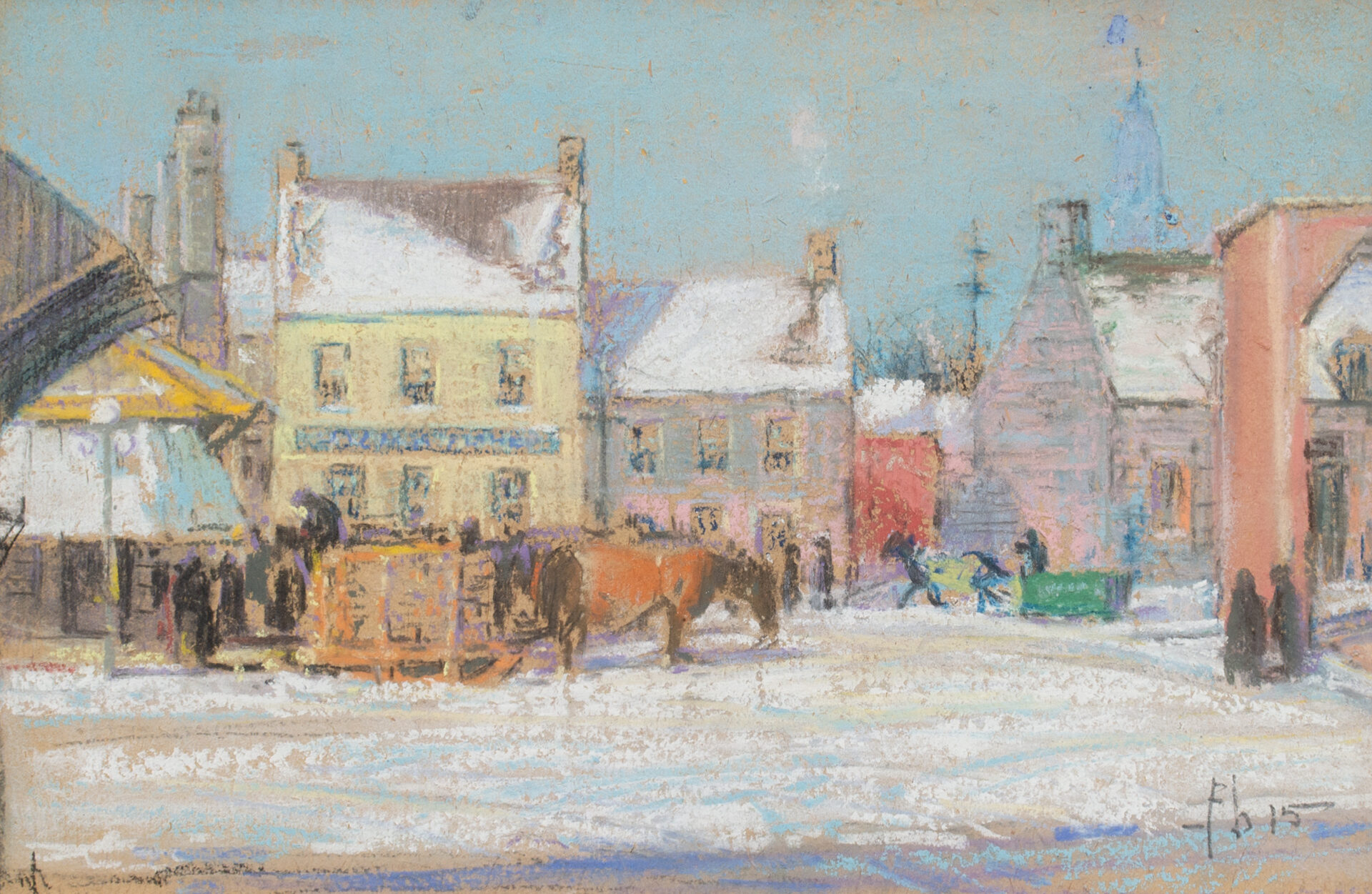 Franklin Brownell moved from Montreal to Ottawa in 1887. By this time in his life, he had trained in Boston, and under the significant tutelage of the French painter Adolphe Bouguereau at the Académie Julian in Paris. He eventually became headmaster at the Ottawa Art School, and would teach there until 1900, when he moved on to head the Women’s Art Association of Ottawa, later the Art Association of Ottawa. A member of the RCA, he was also a founding member of the Canadian Art Club. While listing his associations and awards might seem pedantic, it is critical to note how accomplished and connected Brownell was doing the course of his career. He worked with Maurice Cullen and Suzor-Coté, contemporaries in whose work we can see parallels.

Brownell was very content painting in Ottawa and found the vibrancy of the city, with its busy markets, bustling life, and monumental architecture, very appealing. Upon becoming Canada’s legislative capital in 1866, Ottawa was at the center of what was then Canada. Previously called Bytown, the region, including the historic Byward Market, was incorporated into the City of Ottawa in 1847. Between the attractive hustle and bustle of the market and the nearby Gatineau River region, Brownell had ample subject matter readily at hand. This delicate scene depicts that hustle and bustle at the market on a cold winter’s day. All is bathed in icy sunlight, everyone is wrapped against the cold, even the horses are blanketed as they penitently wait for their sleighs to be loaded.

Peleg Franklin Brownell, painter, teacher (b at New Bedford, Mass 27 July 1857; d at Ottawa 13 Mar 1946). After studying at the Boston Museum of Fine Arts, he went to Paris to study under Robert-Fleury, Bouguereau and Bonnat. In 1886 he became principal of the Ottawa Art School and…

Peleg Franklin Brownell, painter, teacher (b at New Bedford, Mass 27 July 1857; d at Ottawa 13 Mar 1946). After studying at the Boston Museum of Fine Arts, he went to Paris to study under Robert-Fleury, Bouguereau and Bonnat. In 1886 he became principal of the Ottawa Art School and subsequently headed the Woman’s Art Association of Ottawa (later Ottawa Art Association), retiring 1937. He also painted in the West Indies, the US, the Gaspé and the Gatineau. Besides highly keyed landscapes, he produced portraits, flower studies, marine and genre scenes in oil, watercolour and pastel.

A founder-member of the Canadian Art Club (1907), he was represented in the exhibitions of several art associations and showed internationally at the 1893 Chicago World’s Columbian Exposition; the 1900 Paris World’s Fair, at which he won a bronze medal for his RCA diploma work, The Photographer, 1896; the Louisiana Purchase Exhibition, St Louis, 1904; and the British Empire Exhibition, 1924-25. His paintings are found in major Canadian collections. Perhaps his best-known canvas is The Beach, St. Kitts (1913).