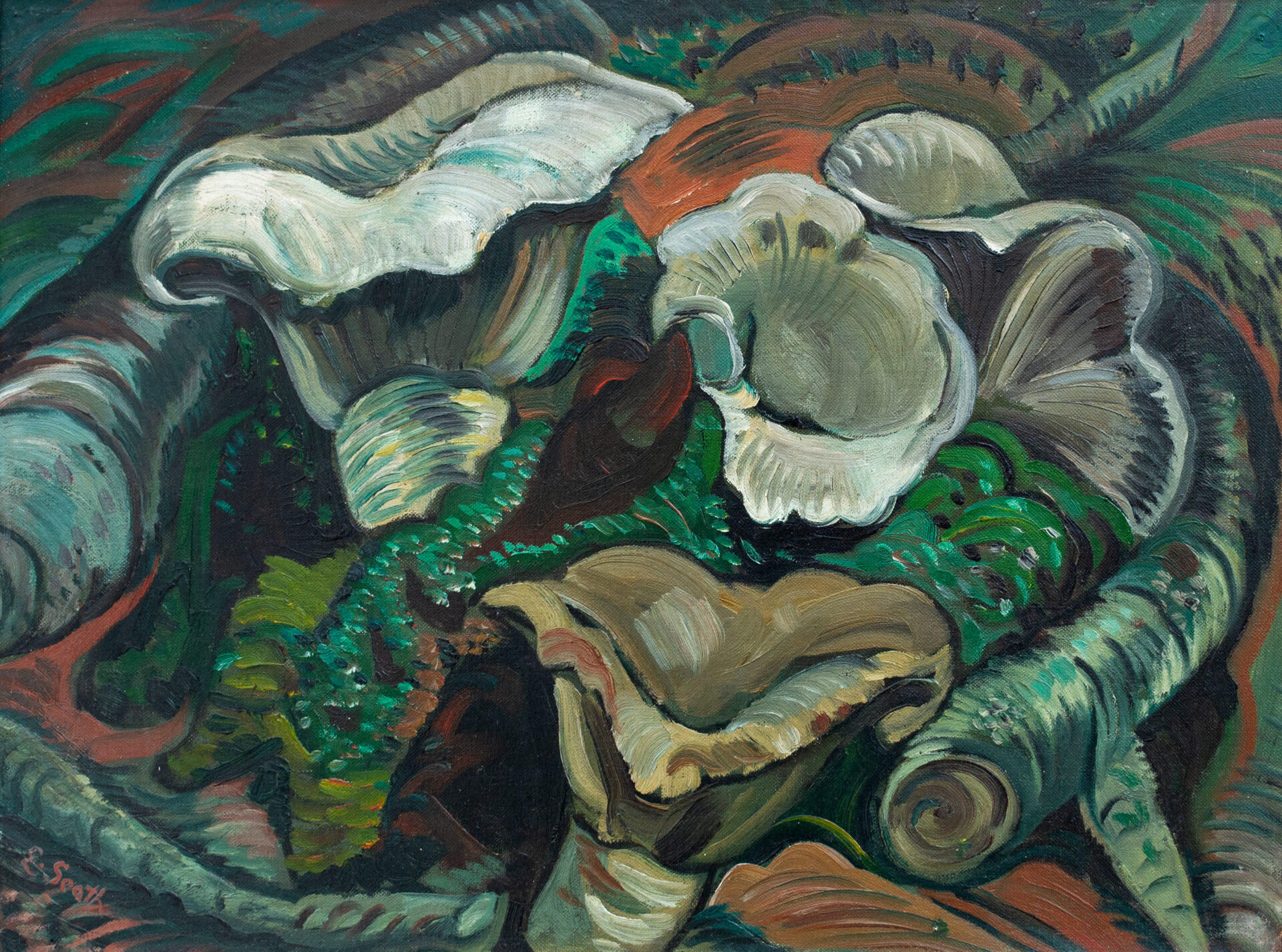 Ethel Seath’s paintings can be seen in complete contrast to her work as a commercial illustrator. Referred to as an artist who worked in “black and white” she would have created line drawings for three prominent Montreal newspapers; The Montreal Witness, The Montreal Star, and the Family Herald. When the opportunity came to teach at The Study, a new art school that had just begun operations in Montreal, Seath’s creativity was unleashed. With a particular purpose behind them, newspaper illustrations were about conveying information, telling the story, and allowed for little creative expression, if any. By teaching, not only could she talk about creativity, but she was required to demonstrate it. All the ideas that had no room to show themselves in her commercial work began to explode. Toadstools is just such a work. Swirling and churning, the forms of chanterelles seem to burst off the board, catch themselves and swirl back again, only to unfold outward in another direction, swirling there and then turning back again. It is a wonderful, organic, lyrical still life. Such a simple thing, a tumble of mushrooms on an indiscernible surface, it is a composition that stays on just this side of realism. Butterfly-like, assuredly painted, it is a confident and thoroughly expressive work. The only thing it has in common with newspaper illustration is an extraordinarily deft and skilled use of black.

1879-1963 A painter who enjoyed depicting everyday objects, Seath often painted still lifes and landscapes with an eye for abstract qualities. Her treatment of space was often decorative, with attention to how various forms interacted with each other. Due to familial financial constraints (her father was chronically ill), Seath began…

A painter who enjoyed depicting everyday objects, Seath often painted still lifes and landscapes with an eye for abstract qualities. Her treatment of space was often decorative, with attention to how various forms interacted with each other. Due to familial financial constraints (her father was chronically ill), Seath began work as an illustrator for “The Montreal Witness” and later “The Montreal Star” soon after finishing high school. Her commercial success allowed her to enroll at the Art Association of Montreal and, in 1911, to join Maurice Cullen’s sketching trips in the Quebec countryside. In 1917, she became an art teacher at The Study, a Montreal private girls’ school, where she remained for 45 years. Despite initially having little inclination to teach, she was an engaging instructor and considered her years at the school as the happiest time of her life. She was known to encourage her students to “Fill the page!” and “Make a mess!” A founding member of the Beaver Hall Group, Seath also belonged to the Canadian Group of Painters and exhibited frequently with both associations. Her work was also shown in Baltimore, Maryland (1931), the New York World’s Fair (1939), Yale University, Cambridge, Massachusetts, and the Tate Gallery, London. She is represented in the collections of The National Gallery of Canada and the Montreal Museum of Fine Arts.
(Canadian Women Artists History Initiative, Concordia University, Montreal)