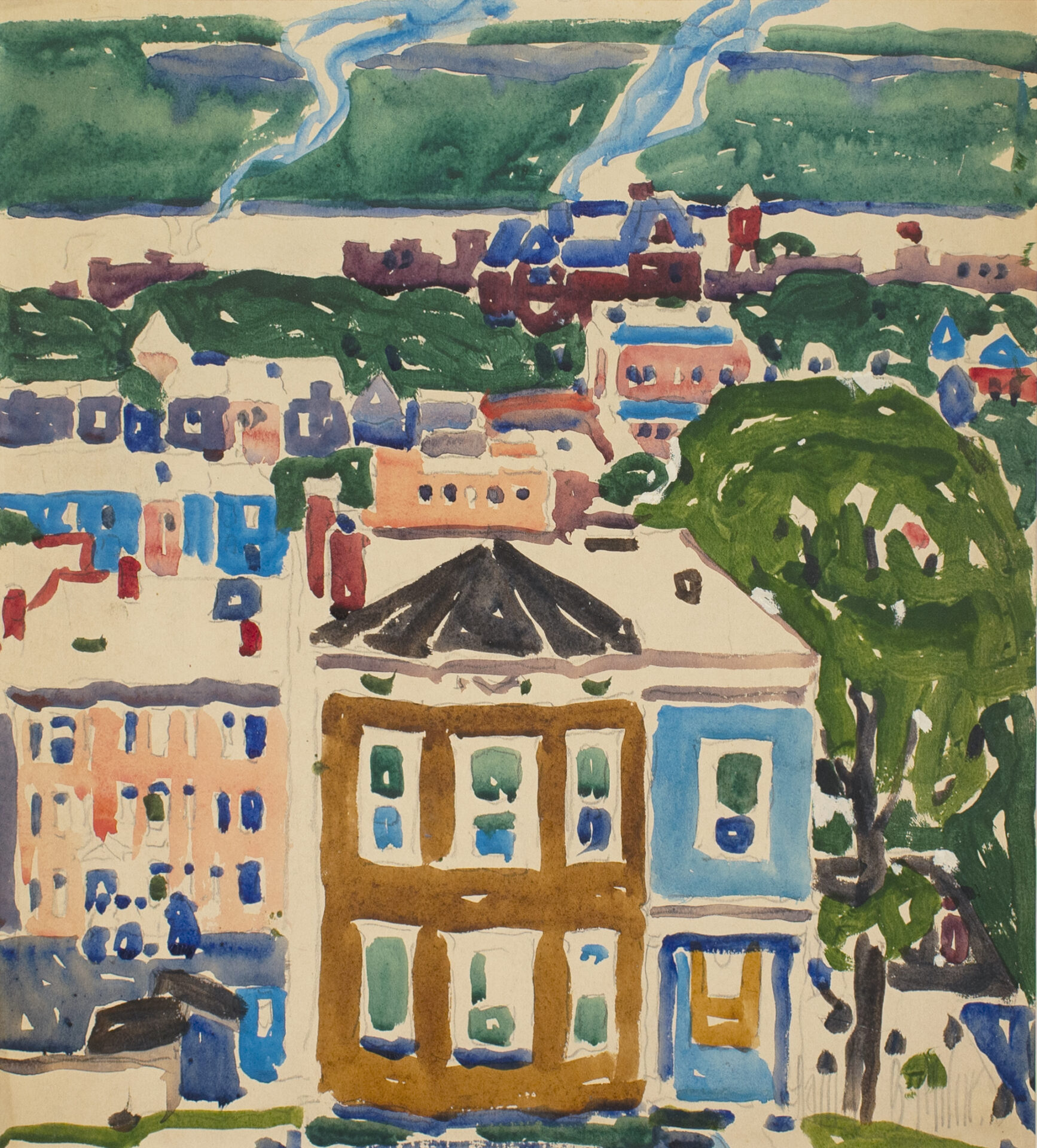 The time he spent in New York was a critically important phase in the early development of artist David Milne. He left Paisley, Ontario in 1903, gravitating to New York in search of education, experience, and exposure to art. He was there when The Ash Can School held their first independent exhibition, read Emerson and Whitman, and soaked it all in. From 1910 – 1912 he focused on atmospheric effects in his work, painting in an Impressionist manner. He had seen an exhibition of Cézanne’s watercolours at the Stieglitz Gallery in 1911 – the first North American showing of the artist’s work. Milne instantly began down a new path, using colour to define spaces, using separate colours to describe shapes, and most importantly, using negative space to define the whole. In 1913, as we see in this work, he turned his attention to structure and form. Milne was, throughout his life, an incredibly driven painter. He would pursue his ideas relentlessly, exploring them multiple times until
=he had completely devoured their possibilities. The Armory Show, which he saw the year this work was painted, must have been a revelation. Over 2,000 works of art were on view, everything from van Gogh to Raoul Dufy, who, as a fauvist painter using eclectic colour, would certainly have interested Milne. City on the Hudson exemplifies his New York years not only by its subject, but in its Celanese treatment of structure, and the role played by the negative spaces in the work

David Brown Milne was born at Burgoyne, Ontario in 1882. The youngest of 10 children born to Presbyterian Scottish immigrants, Milne’s training and initial recognition took place in New York. In Canada he was practically unknown until 1934, and he did not receive the same attention as the Group of…

David Brown Milne was born at Burgoyne, Ontario in 1882. The youngest of 10 children born to Presbyterian Scottish immigrants, Milne’s training and initial recognition took place in New York. In Canada he was practically unknown until 1934, and he did not receive the same attention as the Group of Seven, his contemporaries, until recent years. Succeeding generations of artists have generally given him the highest acclaim among Canadian painters. He is usually singled out by foreign curators and critics as our foremost painter. Clement Greenberg, the American art critic, thought Milne was, with John Marin and Marsden Hartley, among the three most important artists of his generation in North America. The British Museum has been quietly acquiring his work in recent years.

As a high school student at Walkerton, Milne was considered by the principal, Jos Morgan, to be the most accomplished student he had seen in 40 years. Milne was particularly interested in botany, and he drew constantly. Before he embarked for New York City in 1903 to become an illustrator, he spent three years as a rural teacher, took a correspondence art course and experimented with PHOTOGRAPHY. In New York he studied at the Art Students’ League (1903-05), attended lectures by Robert Henri and William Chase and visited galleries such as the Durand-Ruel where he was mesmerized by Monet, and Stieglitz’s little “291,” where he saw work by Cézanne, Brancusi and Matisse.
Although he and his partner, Amos Engle, kept a commercial art studio at 20 42nd Street East for 10 years, where Milne churned out posters and tried to be an illustrator, it wasn’t until about 1909 that he decided to be a painter. For a decade he exhibited brash avant-garde paintings regularly with all the leading art societies, at the N.E. Montross Gallery, at the Philadelphia Academy of Art, in the famous Armory Show (1913) and in the Panama-Pacific Exposition in San Francisco (1915), where he won a silver medal. He was often noted in the press, usually favourably (such as in the New York Times), and was considered one of the most talented of the young turks who were bringing modernism into the world. Milne was on the executive of artist societies, on juries, and once in about 1915 held an exhibition of his works in his apartment, where he had painted the walls black.

In 1916 Milne and his wife Patsy (née May Frances Hagerty), whom he had married in 1912, moved to Boston Corners in upstate New York, where his work achieved a new kind of power. Rural living suited him and his way of working. His painting shifted dramatically from the often vertical format of New York to the horizontal repose of landscape. He was both productive and innovative, but the urgency of World War I tugged at him. He joined the Canadian army at the end of 1917, trained in Toronto, spent several months in Québec, and arrived in Europe just before the war ended. Accidentally he found out about the Canadian War Records and in 1919 painted camp scenes in England, and the deserted battlefields in France and Belgium.
He returned to NY State and painted prolifically, even during summer projects in the Adirondacks. In 1923-24 he spent a winter in Ottawa trying unsuccessfully to establish himself in Canada. He finally returned to Canada in 1929 (separating from his wife in 1933), and from then on he lived and painted in Ontario: a summer in Temagami, a winter in Weston, then at Palgrave, Six Mile Lake, Toronto, Uxbridge, and finally at Baptiste Lake near Bancroft. His work became better known in Canada in 1934 after he sought the patronage of Alice and Vincent Massey, who organized several commercial exhibitions, the first of which was seen by Alan Jarvis, later director of the National Gallery of Canada, and the first in Canada to write enthusiastically about Milne. Jarvis brought Milne’s work to the attention of Douglas Duncan, who later became Milne’s agent and dealer.

Milne’s art was formed by both American and French Impressionism and by Henri Matisse’s Fauvism. Claude Monet, especially in the aesthetic unity of his paintings, was the most pervasive influence. Milne forged these influences into his own powerful way of seeing and painting. He endowed the simplest subjects – houses, barns, flowers, trees and still lifes – with majestic stature. Figures appeared frequently in his work in New York and Toronto, but the landscape dominated most of his production.

In the last 15 years of his life a series of fantasies emerged in his art. These may have been inspired by children’s paintings which he saw at the school near Six Mile Lake, and by his return to the watercolour medium in 1937 after a 12-year hiatus. He began to choose odd subjects to paint: figurines and eccentric still lifes, his version of children’s paintings, and visual depictions of biblical stories. Certainly this shift in direction was given a boost by a profound change in his life at about the same time: his falling in love with Kathleen Pavey (b 1910), whom he met in 1938 and with whom he lived from 1939 on; and it was further emphasized by the birth of his only child, David Jr, in 1941. Baby bottles and toys became part of his still lifes. The strong biblical references that underlie many of the late paintings show Milne’s symbolic understanding of life, death, rebirth and resurrection. The Ascension series, perhaps influenced by his seeing the work of Wyndham Lewis, who was waiting out the war in Canada, best illustrates his serious intent, but the Noah and the Ark series or Snow in Bethlehem show that he could be amused by his biblical reinterpretations.

As he became better known, Milne got to know other artists: Carl Schaefer, Gordon MacNamara, Jack Nichols, Isabel McLauglin, A.Y. Jackson, Arthur Lismer and others. He did not directly influence many artists, although his austere example and his purity of aesthetic concern has been an inspiration for subsequent artists. Harold Town, in homage, called Milne the “Master of Absence” for his ability to reduce a painting to its essentials.

Milne also invented a method of making colour drypoints, printing one colour over another with different plates for each. Etching and drypoint (which are both traditionally black and white) were techniques that Milne had learned about in New York, where he had done works in both media, especially in 1911. He was familiar with other printing methods: he printed a number of unusual (and powerful) lithographic works in 1915. He invented his colour drypoint in 1922 and then executed works in this process sporadically over 20 years (1927-47), executing nearly 60 subjects but seldom running editions. The discovery of the optimum print was Milne’s chief goal. Many critics consider Milne’s drypoints among his finest works.

Milne was an exceptionally gifted writer as well as a brilliant painter. His unpublished letters to his New York friend James Clarke, the Masseys and others, his Autobiography (1947), and his journals and painting notes (most are in the National Archives of Canada are a vast and rich store of observations, thoughts and descriptions unparalleled in Canadian art. Most of Milne’s writings on art are about his own aims, successes and failures, but he is equally candid and shrewd about the paintings of others. His writings show a quick mind and a good sense of humour, but at the same time they mask a good deal of the sacrifice that Milne suffered in order to devote his whole life to being an artist. For 40 years, apart from occasionally bartering his labour in exchange for necessary supplies, he managed to dedicate all of his time to the business of painting.

Although Milne spent half his career in the United States and was a modernist who frequently argued that subject matter had nothing to do with the aesthetics of painting, Milne was also a staunch Canadian nationalist and a monarchist. In 1945 he sent a series of flag designs to the government. He admired much about the United States, but he never considered becoming an American citizen, even though his acceptance in Canada was difficult and slow and the adulation he had received in New York in his early years had been heady. In the late 1930s he worried about the loss of Canadian talent to richer countries, and he urged this nation to pay more attention to its art, music and literature.

Approximately half of Milne’s paintings are oils and half are watercolours, and his lifetime production, after the destruction of many paintings throughout his career, stands at close to 3000, with an equal number of drawings and prints. The National Gallery of Canada, the Art Gallery of Ontario, the McMichael Canadian Art Collection and the Winnipeg Art Gallery all have excellent collections of his work. Billboards (1912), Painting Place (1930), Boston Corners (1917), Raspberry Jam (1936) and White Poppy (1946) are fine examples of his work at different periods.