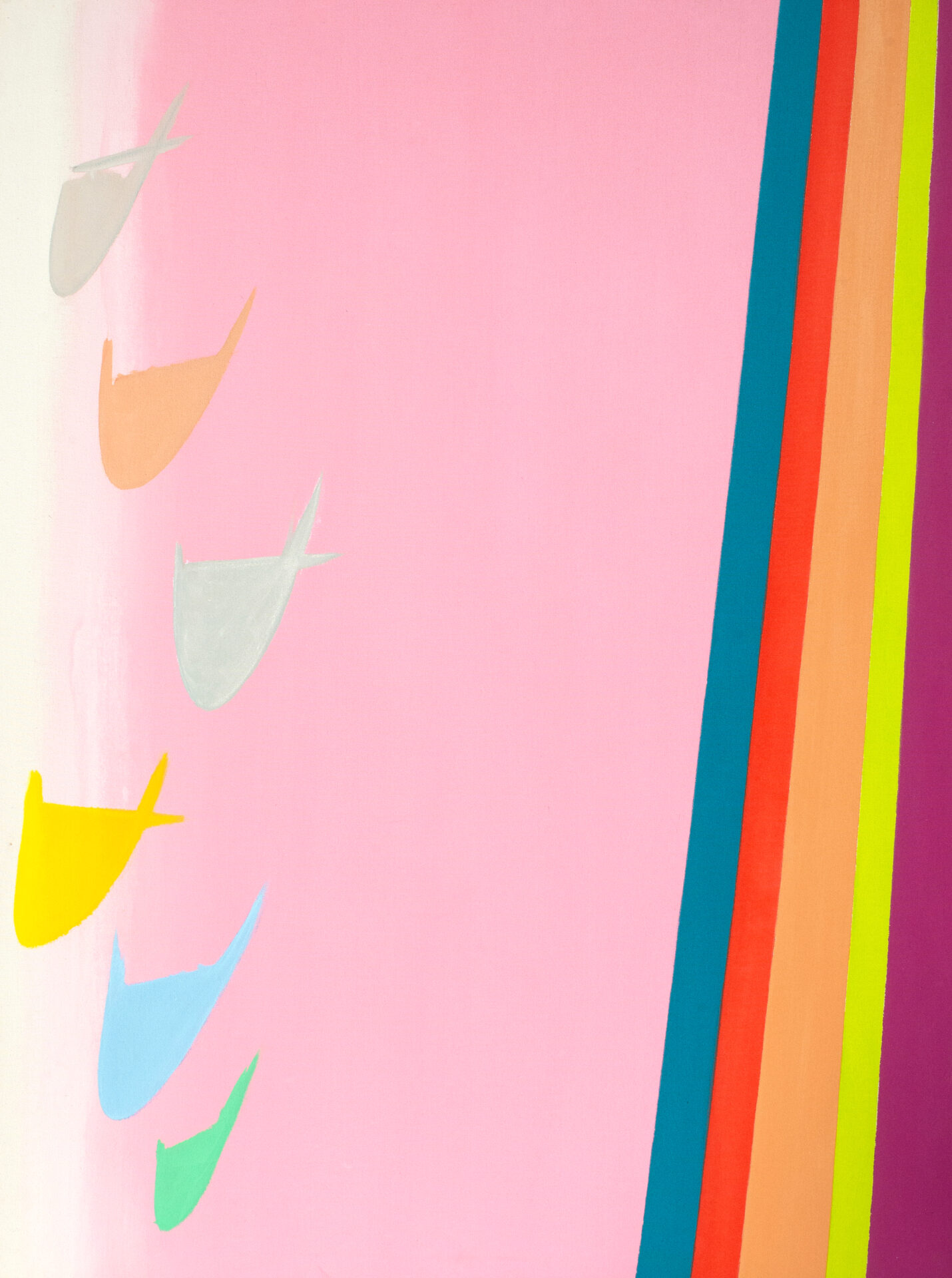 Jack Bush took his ideas from his life’s experience. The Sash series comes from a dress his wife wore in the early 1960s, the Jazz works have an obvious inspiration in music, but the Spasm series, which this work is from, come from a deeply personal experience. In 1969, Bush had a severe attack of angina, which hospitalized him and threatened his life. The fluttering shapes are taken from the electrocardiogram readouts, which Bush contemplated in the conversations he had with his doctor. As soon as he was able he returned to the studio, using the imagery in works that convey his fear – first as blips (later called “heart throbs”) that are aggressive and echo the pain he felt – then as smoothed out flying shapes that are less sinister – then into fluttering, almost butterfly-like shapes that move upward, rather than rain downward on the canvas, and that feel optimistic and uplifting. It was as if he created these works to comfort himself, to work through the experience, and to express the impact the health scare had on his outlook on life. Interestingly, the blips, or flutters, are painted in light colours that belie the serious information they convey. As if to contain, or settle them, bars of strong colour, solid and assured, border the other half of the work. These bars of colour, steady and upward moving as they are, serve to quell the uncertainty implied by the flutters, lessening and contrasting their threat. An uplifting and optimistic work, Disappearing speaks to Bush’s improved health, his optimism, and to the continued evolution of his paintings.

John Hamilton Bush, “Jack,” painter (b at Toronto 20 Mar 1909; d there 24 Jan 1977). Jack Bush was raised in London and Montréal, where he worked initially as a commercial artist in his father’s Montréal firm, Rapid Electro Type Company. In 1928 he moved to the Toronto office of…

John Hamilton Bush, “Jack,” painter (b at Toronto 20 Mar 1909; d there 24 Jan 1977). Jack Bush was raised in London and Montréal, where he worked initially as a commercial artist in his father’s Montréal firm, Rapid Electro Type Company. In 1928 he moved to the Toronto office of the Rapid Grip Company, where his interest in fine art as well as commercial art was stimulated by contact with the work of the Group of Seven. In Toronto he pursued his interest in fine art throughout the 1930s, painting and taking night classes at the Ontario College of Art with Frederick Challener, John Alfsen, and Charles Comfort. He continued to work as a commercial artist in Toronto until his retirement in 1968, from 1942 on in partnership with Leslie Wookey and William Winter.

For two decades Bush was an ardent landscape and figure painter after the manner of the Ontario Society of Artists and the Canadian Group of Painters. During this period he developed a personal manner rooted in Canadian art and his own unique “handwriting” that stuck with him to the end. Bush’s handwriting is easier to see than to describe. In his early art it sometimes appears as dynamic cloud formations and figure groupings which intrude into or float within many of his pictures. (In fact, “thrust” was a series name for some of Bush’s early abstractions.) Movement into the picture surface from one or more of its edges (in the “thrusts” and also in the “fringe” series of paintings) and dynamic placement became favoured Bush motifs.

Like many of his younger contemporaries, by the 1950s Bush had become dissatisfied with Canada’s detachment from international contemporary art. Looking back in 1967 he observed that “the desire for a National Art, to show the world how great Canadians were, never got off the ground. And I think it will take another half century to learn that that is not the way to get off the ground.” In 1953 his dissatisfaction led him, in company with several younger Toronto artists, to become a founding member of the Painters Eleven.

Like the other members of the Eleven, Bush pursued abstraction as best he could, “abstracting” from nature in a manner derived from the illustrations becoming available in international magazines as well as from his practice as a commercial artist. As had been the case with Tom Thomson and the Group of Seven, he “applied” contemporary design to serious painting, only in Bush’s case the application was closer to Cubism than to Art Nouveau.

But for the fact that he became connected with the emerging New York art scene in the late 1950s, Bush might have remained a provincial modernist. This connection came at first through a young Canadian painter in New York, William Ronald, and subsequently through a close and lasting friendship with the American critic Clement Greenberg.

Greenberg met Bush in 1957 during a Toronto visit to the studios of several members of Painters Eleven. At the time, Greenberg was not impressed by Bush’s oil painting, but admired the directness and simplicity of his watercolours and encouraged him to follow them up on canvas. Bush responded with large, thinly brushed paintings exploiting enlarged versions of his characteristic “handwriting.” He never looked back.

Between 1958 and 1966, Bush applied oil paint in diluted washes onto canvas sized with rabbit-skin glue but not primed with gesso. This application gave something of the effect of acrylic paint stained into unsized canvas, a method of application that was common at the time. While thinned oil paint tends not to be as brilliant as stained acrylic, Bush’s loose and casual application – usually with a brush – enlivened the surface, giving what became known as his “thrust” and “sash” paintings their characteristic warmth.

In 1966 he switched to water-borne acrylics, somewhat belatedly but for the usual reason: abstract painters working at the time on large canvases with solvent-borne media had become increasingly aware of their hazards. (The American painter, Morris Louis, had died of lung cancer in 1962; his friend, Kenneth Noland, described his studio as “a furnace of turpentine.”) Bush made the transition to the new medium swiftly and easily – seemingly without losing a step, helped perhaps by his experience with gouache and watercolour. Water-borne acrylics afforded a general gain in colour brilliance that compensated for its more even facture. By the 1960s, he’d begun to experiment with different paint applications to enliven backgrounds and regain something of his former touch, and imposed an increased variety of shapes upon those surfaces. If the 1960s were characterized by ever increasing colour variety and invention, marked by stacks and “fringes” of colour bars, the ’70s saw that invention carried into an extraordinary variety of formats and layouts dominated by coloured loops, totems, musical motifs and “handkerchiefs.”

Perhaps because of his background in commercial art, Bush frequently worked on paper, making preliminary colour notations for large paintings, patterns for silk screen prints and finished works. Among the triumphs of his art are his gouaches. Unlike watercolor, gouache uses opaque “body colour” for light areas and highlights, whereas watercolour leaves exposed paper for whites and transparent washes for colour tints. Heavy and opaque, Bush’s gouaches exploit dry, hot pastel colours with strong admixtures of white. They include some of the supreme works on paper of the 1960s and ’70s, rivaling the collages of Robert Motherwell and the paintings on paper of Helen Frankenthaler.

His art found expression through colour by way of “abstracted” motifs which retained a surprisingly innocent connection to the visible world. Bush derived them from the most unexpected sources: gift wrapping, national flags, paint spatters, window displays, neckties, road signs, flowers and gardens, totems, musical notations, handkerchiefs. After the fashion of a commercial artist, Bush himself referred to composition as “layout.” But whereas the term is commonly used to describe the organization of a printed page, Bush applied it to his distinctive picture formats, which involved the eccentric placement of graphic shapes. These dynamic shapes often related rather awkwardly to the picture rectangle, as if wrenching it to the verge of “bad design.”

Despite his years of experience as a commercial illustrator, Bush’s abstract paintings never looked “packaged” and slick. A resistance to its apparent awkwardness seems to have inhibited the ready acceptance of Bush’s art. To an art world which equated the difficult with the ugly or the rigidly bland, Bush’s pictures appeared to be pretty paintings gone wrong: easily improved they seemed, but improvement couldn’t get them right. Instability and colour complexity combined to confound expectation and subvert understanding and analysis. Added to this was the fact that Bush, the person, had no intellectual pretensions and, like the artist himself, his art was without irony or guile. Above all, Bush was a magnificent colourist. Along with the American Kenneth Noland, he was one of the greatest masters of expressive colour since Matisse and, like Noland and Hans Hofmann, he was able to use colour to build structure. Unlike other colorists, Bush tended never to repeat colours in a picture, and their proliferation gave his paintings an exuberant sense of optical dazzle. Like Matisse (whose art he loved), Bush made high art from the intuitive relations among drawing, surface handling and colour – realizing instinctively, it seemed, that “finish” often undermined expression and that the seemingly underfinished and incomplete was often the more alive and expressive. In an era which prized rigid geometry, symmetry and almost mechanical finish, Bush’s paintings always looked handmade and admitted their debt to Matisse openly and lovingly. They were disarmingly beautiful.

Bush’s acceptance grew throughout the 1960s, both in Canada and abroad. In 1964 his work was included in Clement Greenberg’s Post Painterly Abstraction exhibition, organized by the Los Angeles County Museum and travelling subsequently to Minneapolis and Toronto. In 1967, he and Jacques Hurtubise represented Canada at the São Paulo Biennial. He was collected by major museums in Canada and abroad, among them the Boston Museum of Fine Arts and the Tate Gallery in London. In 1976 he was honoured with a retrospective exhibition of his mature abstract painting, organized by the Art Gallery of Ontario, which toured to major Canadian museums. The National Film Board also produced an outstanding film documentary based on the exhibition. He died in January 1977, having just returned from the opening of his retrospective at the Edmonton Art Gallery.

Despite his international audience, Jack Bush remained deeply Canadian. Perhaps because success came late, he retained a diffidence and humility that set him apart from many artists of his generation. He remained devoted to Canadian art and artists, especially to artists some two generations his junior. His studio was always open to artists, even in the years after 1969 when angina had begun to limit his activities.

“Canadianness” is difficult to define – it is present, perhaps, in the awkwardness that his paintings suggest. Bush, himself, was like a Morley Callaghan character- plain speaking on the surface, complex underneath – and his manner of painting was the visual equivalent of Callaghan’s very “Canadian” prose: flatfooted, unadorned, coarse-grained and somehow the better for it.

To the end he also retained a flavour of his Group of Seven upbringing, perhaps because he remained fundamentally an old-fashioned figure-ground painter. Instead of gnarled trees beaten by the elements he exploited frayed, exuberant shapes against roughly painted backgrounds.

By Terry Fenton, The Canadian Encyclopedia 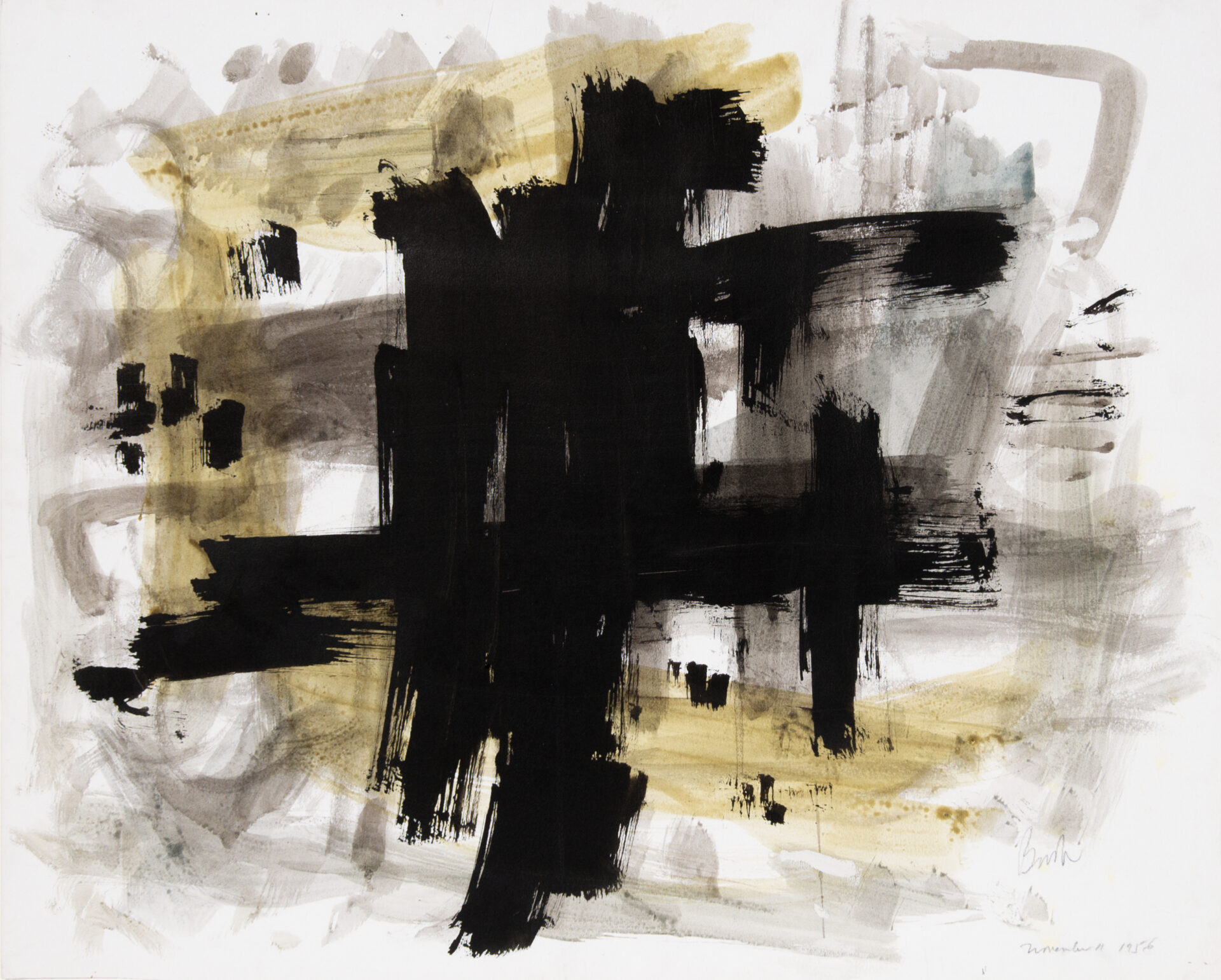