The following essay and above cataloguing has been contributed by Charles C. Hill, former Senior Curator at the National Gallery of Canada:

On 1 August 1930, the Canadian government supply boat, Beothic, sailed out of Sydney harbour, Nova Scotia to make its annual voyage to the Canadian Arctic. Passengers included research scientists, R.C.M.P. officers going to their new posts, and two artists, A.Y. Jackson and Lawren Harris. Jackson had travelled north on the Beothic in 1927 but this was Harris’ first trip to the Arctic. In his autobiography, A Painter’s Country (1958), Jackson suggested that the impetus for the voyage was partly to get away from all the pessimism caused by the economic depression. However, the trip north was in fact a logical extension of their constant exploration of Canada’s many landscapes and Harris’ conviction that the “North” played an essential role in the evolving definition of a nascent Canadian identity. His concept of the North was not limited to the political definition of Canadian territory; it also included Greenland.

The Beothic’s itinerary is well documented in Jackson’s diary 1. They first stopped at Godhavn, Greenland then travelled north along the coast to Cape York, Melville and Robertson Bays, all in Greenland, then across Smith Sound to Rice Strait, Pim and Ellesmere Islands and Fram Haven in the Canadian Arctic. Blocked by ice and unable to reach the post at Bache Peninsula, they returned to Nerke on Robertson Bay then travelled south west to Devon Island and Lancaster Sound trying to reach Melville Island. Blocked by ice once again, they turned east through Lancaster Sound to Eclipse Sound and Bylot Island at the northern tip of Baffin Island and followed Baffin Island’s east coast south to Pond and Clyde Inlets, Cumberland Sound, Pangnirtung, and Lake Harbour. The ship then sailed west crossing Hudson Bay to Chesterfield Inlet, then returned east to Port Burwell in North Labrador, arriving back at Sydney on 27 September 1930. Almost two months, it was the most extensive trip ever taken in the Arctic region in one season.

As Jackson noted in his diary, “It has been a difficult voyage to work, not ashore much and a lot of fog – at the places we wished most to see,” and Harris later wrote, “painting was difficult as we usually saw the most exciting subjects while steaming through channels or while being bumped by pack ice. On many occasions we had time only to take rapid notes. These notes we worked up into sketches, crowded into our small cabin, seated on the edge of our respective bunks with only a port-hole to let in the light.”2 Yet the voyage was productive and in December 1930 an exhibition of their Arctic sketches was held at the National Gallery of Canada. Jackson showed thirty-six sketches and Harris thirty. 3 None of Harris’ paintings depicted sites from the western portion of the trip across Hudson Bay where there was little to see and when he worked from his earlier drawings.

Iceberg, Disco Bay, Greenland, is possibly the first subject Harris painted on this trip as their first stop, Godhavn, is on Disko (not Disco) Island. “The village is surrounded by icebergs this year,” Jackson wrote in his diary, “so L[awren] and I had our first shot at them, then went to the store and bought some … sweaters.”

Jackson’s drawing and oil sketch of the same iceberg, both titled Iceberg at Godhavn, 4 differ considerably from Iceberg, Disco Bay, Greenland. In Jackson’s oil sketch the brown beach sweeps across the foreground distancing the centered iceberg that floats between the dark blue water and multi-coloured sky animated by a variety of stratus clouds. The crevices and complexity of the icy surfaces are clearly delineated in flowing rhythms of blues, whites and pinks. In the centre foreground of the subsequent canvas, worked up from these studies, Jackson added figures and tents reminiscent of the Inuit tents he and Harris painted at Pangnirtung later in the voyage. 5

Harris’ sketch lacks these humanizing details though he has retained a narrow foreground beach, characteristic of his earlier Pic Island, Lake Superior paintings, to position the point of view and frame the composition. Two small ice fragments lower left lead the eye to the principal subject of the painting, the slightly off centre, large iceberg, painted in simplified forms in a limited palette. From the dark foreground the eye moves up to the play of glowing, yellow-white lights and blue-green shadows created by the light that illuminates the berg from the right. Two thin stratus clouds hug the horizon and the iceberg glows in the midst of the blue water and sky.

A related canvas, Icebergs, Disco Island, 6 is characterized by a similar tranquility and glowing blue and white light. A variety of small and larger icebergs create a slow, elegant rhythm across the canvas and the forms and colours of the bergs are reflected in the still water. Not a cloud blemishes the sky.

The difference between Jackson and Harris’ paintings of the same or similar subjects became the leitmotif of reviews of their joint Arctic exhibition at the Art Gallery of Toronto in May 1931. “Each of the two gives his own version of the whole trip,” wrote Jehanne Bietry Salinger. “You feel that [Jackson] has been penetrated by every feature of the landscape he has viewed and by the life he has met. It has enriched his personality.” While, “Lawren Harris has not identified himself with nature or the life he has found in the Arctic. A strongly individualistic painter, all is pretext to a greater expansion of his own aesthetic reactions. His cruise on the Beothic has helped him affirm his own personality once more.”7 And Humphrey Carver echoed, “[Harris’ paintings] display the cultivated, grown-up mental reaction to his subject, according to a pre-conceived formula and unconcerned with geological and domestic actualities.”8

Salinger and Carver were partly right. But Harris did not impose form on nature, as suggested by these writers, but eliminated “irrelevant” details to achieve “essential” forms, expressing the universal in the particular, creating a world of eternal, archetypal forms. 9 Harris’ Arctic sketches and resultant canvases were the logical outcome of a decade-long exploration to arrive at a synthesis of light, colour and form to express a spiritual and metaphysical message. An iceberg is still an iceberg but Harris has transformed it into a symbol of a higher spiritual plane.

3 In June-July 1936 Doris Mills prepared an inventory of the paintings Harris left in Toronto when he moved to New Hampshire and catalogued thirty-eight Arctic sketches, some having already been sold. The inventory is in the Lawren Harris Collection, Library and Archives of the National Gallery of Canada, Ottawa. 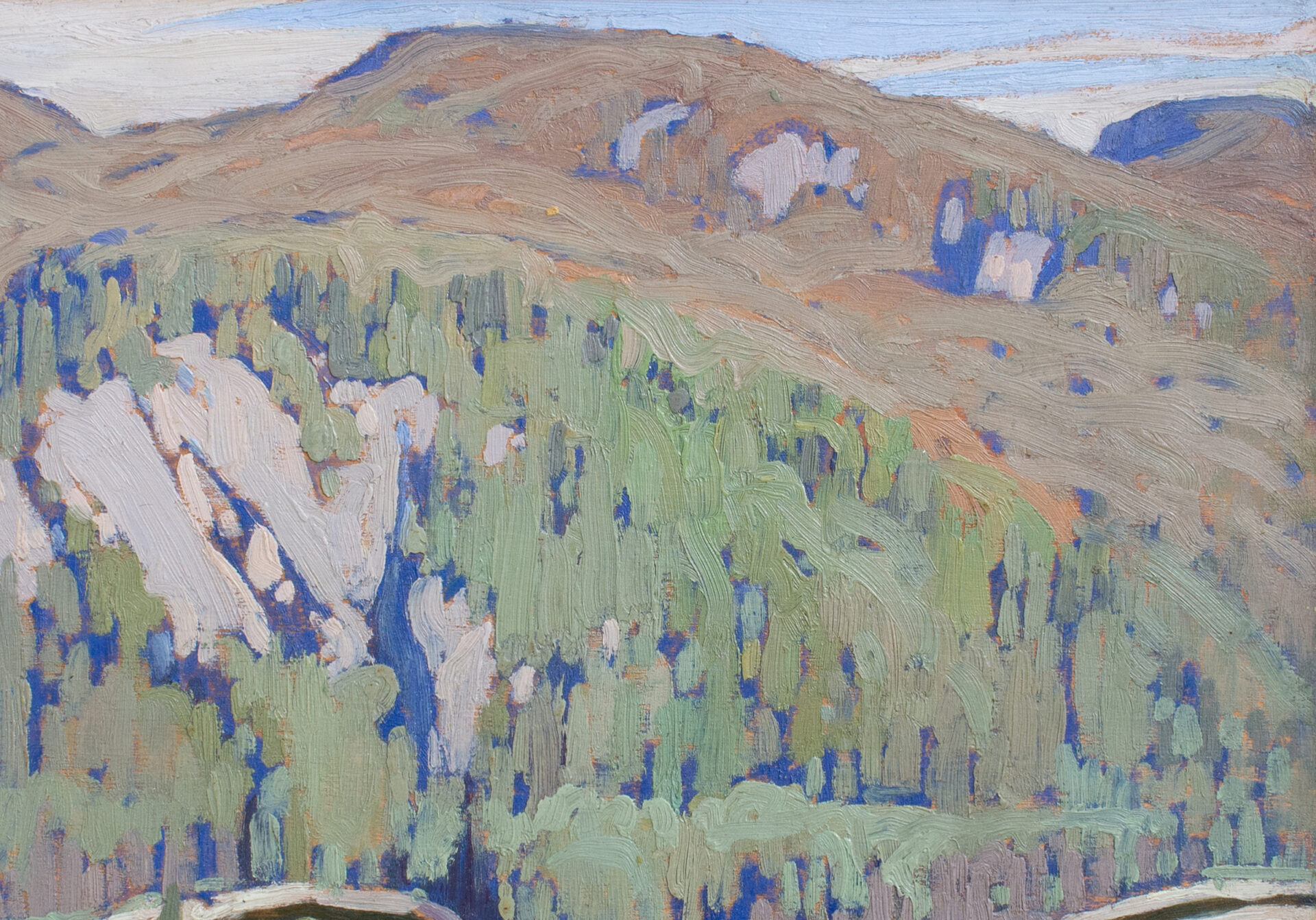