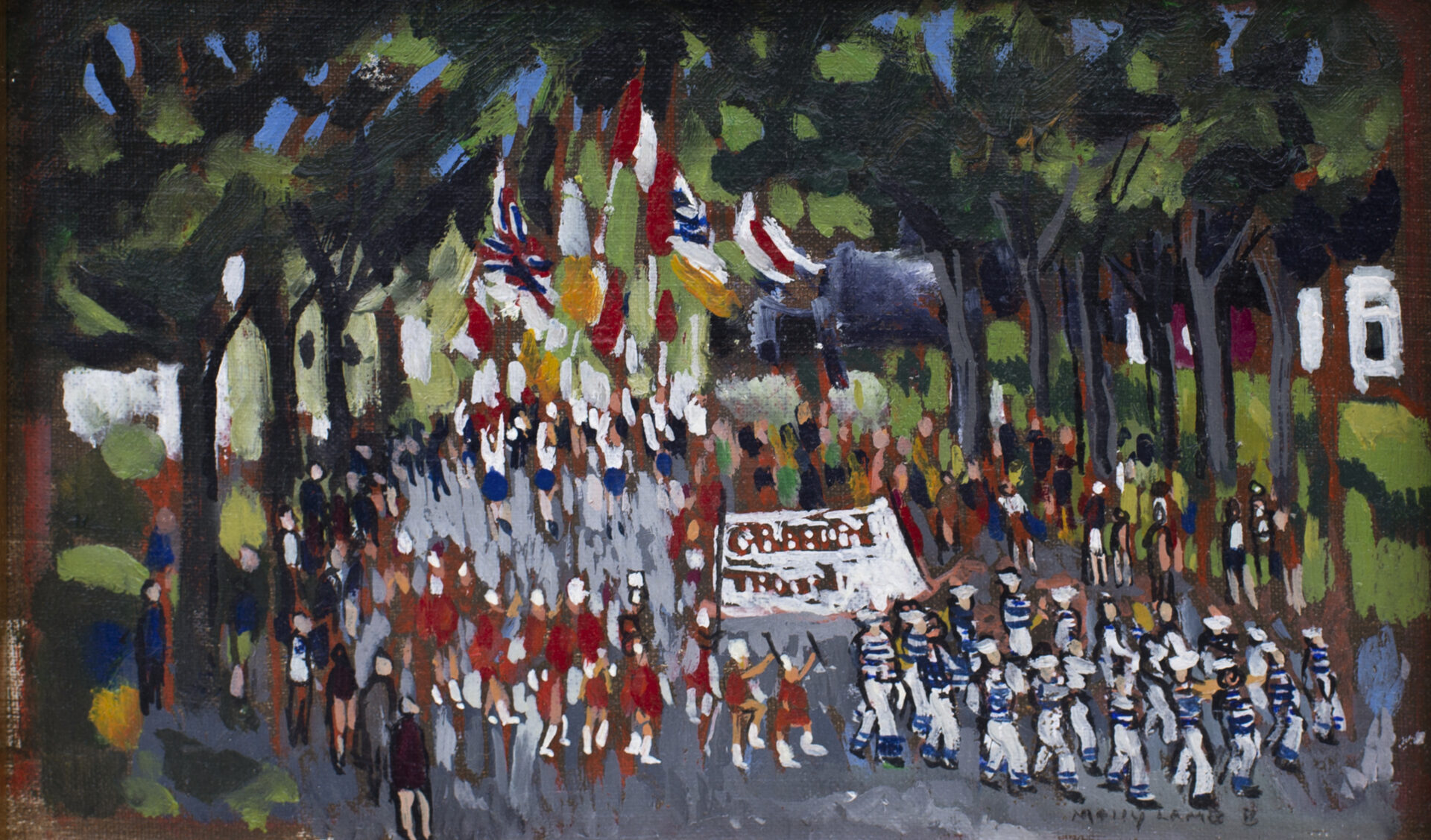 In the 1960s, Molly and Bruno Bobak moved to Fredericton, New Brunswick with their two children. Her interest in scenes of celebrations, public events and city life had continued since her return from England where she has served as Canada’s first female War Memorials artist, and where she had met fellow artist Bruno. They had lived in Vancouver for many years, where she had taught at the Vancouver School of Art. It was a teaching post at the University of New Brunswick, that took her to Fredericton. There, she explored her new city, embracing its streets, parks, squares and public spaces, pubs, and stadiums, where she would find her favourite subject: people gathering. Her depiction of the Canada Day Parade is a delight. Brightly painted uniforms of the various participants divide the crowd into colour groups, and these are surrounded by onlookers, who are further surrounded by trees and buildings. The flags, carried at the centre of the scene, add further colour. Bobak’s brushwork is consistent throughout the crowd, with assured, vertical strokes angled to underscore directional movement, a feature that gives them a feeling of energy. The whole scene, especially the people, seem abuzz with movement.

Molly Joan Lamb Bobak was born on 25 February 1922 in Vancouver, British Columbia. She studied art at the Vancouver School of Art from 1938-1941 with Jack Shadbolt and Charles Scott. In 1942 she joined the Canadian Women’s Army Corps and became the first Canadian female war artist in 1945;…

Molly Joan Lamb Bobak was born on 25 February 1922 in Vancouver, British Columbia. She studied art at the Vancouver School of Art from 1938-1941 with Jack Shadbolt and Charles Scott. In 1942 she joined the Canadian Women’s Army Corps and became the first Canadian female war artist in 1945; she painted in this capacity at Aldershot, Britain, and later in Holland. Of her experiences she wrote an article entitled “I Love the Army” and was quoted as saying, “It was the humanity I tried to capture in my paintings.” On her return to Canada in 1946 she married Bruno Bobak and together they moved to Fredericton, New Brunswick. In 1950-51 Bobak painted in France after receiving a scholarship from the French government and in 1960-61 she returned to Europe on a Canada Council grant. By 1973 she had become a member of the Royal Canadian Academy. Bobak’s paintings are in many collections around the world but she is also an accomplished illustrator and teacher. She has worked for many national and provincial arts organizations such as the National Film Board of Canada and as well has served on the National Gallery’s Ottawa Advisory Board. She resides in Fredericton.