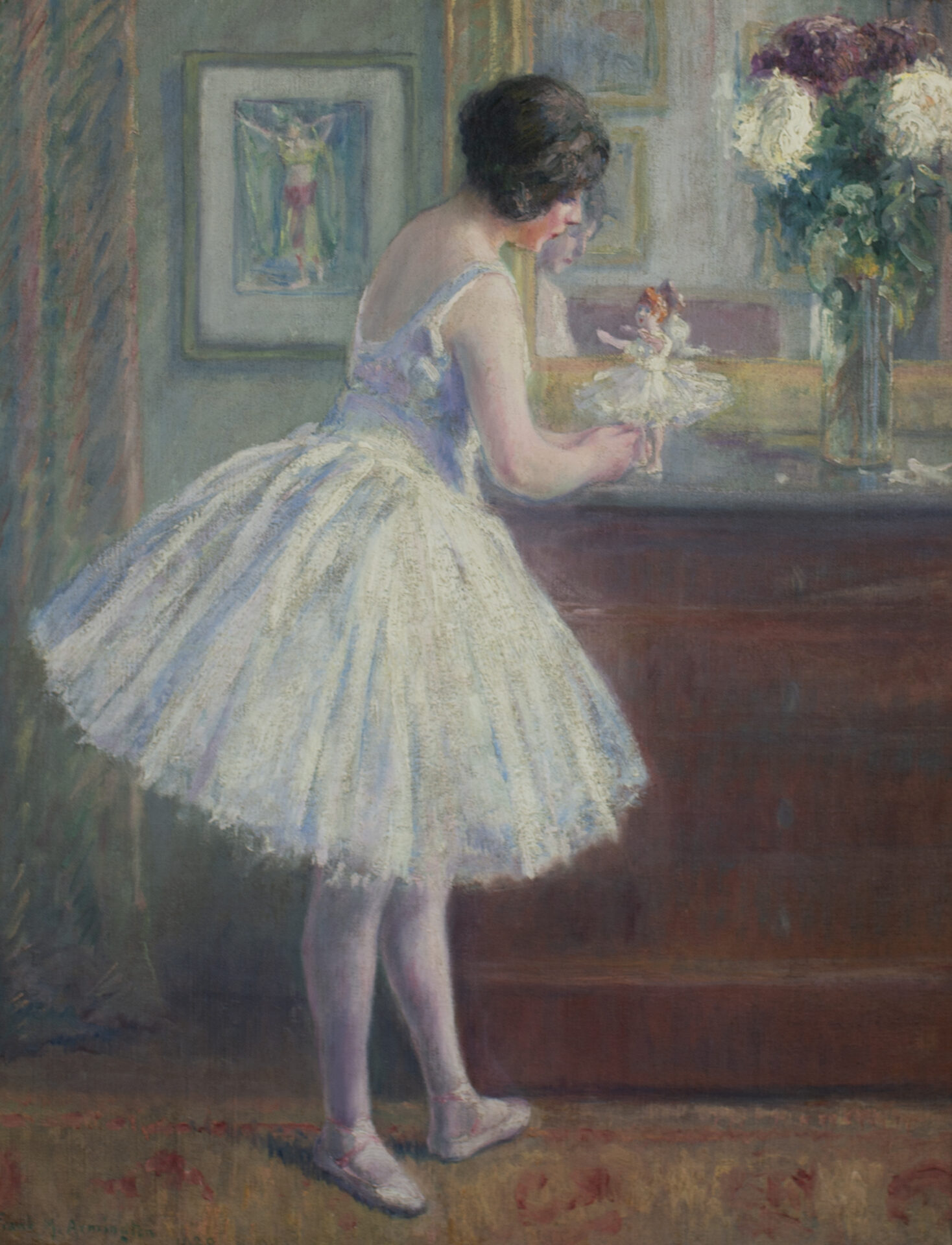 Born in Fordwich, Ontario, in 1876, Frank Armington, like so many early Canadian artists, left Canada in 1899 to move to Paris to continue his art studies. French culture, influences, and art buying citizens would prove critical to Armington’s career, which was divided between Canada and France, twice interrupted by war. He had met Brampton-born Caroline Wilkinson in J.L Forster’s art class in Toronto. She would follow him to Paris where they were married in 1900, returning to Canada shortly afterward. They would work together as painters, etchers, and engravers, enjoying critical and financial success, until Caroline’s death.

In France in 1905, Frank Armington studied with a number of prominent French artists, and was also able to work with Benjamin Constant at the Academie Julian. He had a work accepted at the Salon d’Automne in Paris that year, an exceptional accomplishment as a non-resident. He and Caroline had returned to Canada after the outbreak of WWI, and at its end, were eager to revisit Paris. The 1920s saw him interested in the ballet, and he painted a portrait of the noted Belgian ballerina Yetta- Rianza entitled La Danseuse ~ Yetta-Rianza. This work was shown in the exhibition Paris moderne, and was purchased for the Musée Nationale du Luxembourg from this show. This success buoyed his interest in the subject and he created a number of fine paintings of ballerinas practicing, resting, or posed for their portrait.

La Petite Poupée, or The Little Doll, shows us a ballerina in a graceful pose, feet in the third position, arranging a small doll – one that is also a ballerina – on a dresser. We see the ballerina’s reflected face in the mirror, and the reflected back of the doll, whose legs she is posing. It is a skillfully arranged vignette, they are in opposite positions to one another, as well as reflected opposite positions to one another in the mirror. Over the ballerina’s left shoulder, we see a painting of a dancer, an additional reinforcement of the theme. A curtain at the left adds a final touch, creating a fully dance themed setting for this sensitively handled work.

Frank Armington studied art in Toronto, under J. W. L. Forster, and in Paris, first at the Academie Julian, under Benjamin Constant and Chaumiere, under Lucien Simon. Frank Armington first went to Paris in 1899, but returned to Canada with his wife, Caroline (1875-1939) to teach art in Winnipeg from…

Frank Armington studied art in Toronto, under J. W. L. Forster, and in Paris, first at the Academie Julian, under Benjamin Constant and Chaumiere, under Lucien Simon. Frank Armington first went to Paris in 1899, but returned to Canada with his wife, Caroline (1875-1939) to teach art in Winnipeg from 1901 through 1905. During this period, Robert Fulton Logan was among his students. Returning to Paris in 1906, The Armington’s established themselves as fine landscape and figure artists in both etching and painting. They were both full members of the Societe Nationale de la Gravure Originale en Noir, the Societe des Gravures Francais and the American Federation of Arts. Their original etchings and paintings were frequently included in major French and American exhibitions. Some recent scholars have labeled Frank Armington’s art as Canadian Impressionism. Others have seen his landscape art as akin to the work of Whistler. As usual, however, there comparisons tell us very little. Frank Armington was a master of my styles, and all of them were very individual. How, for example, would one categorize an early masterpiece such as Meditation? Armington’s ability to portray light, shadow and line is seen here at its finest. The mystery and mysticism evoked in this study is a testament to his artistry Raisonne: Braide & Taylor, “Caroline and Frank Armington”, 1990 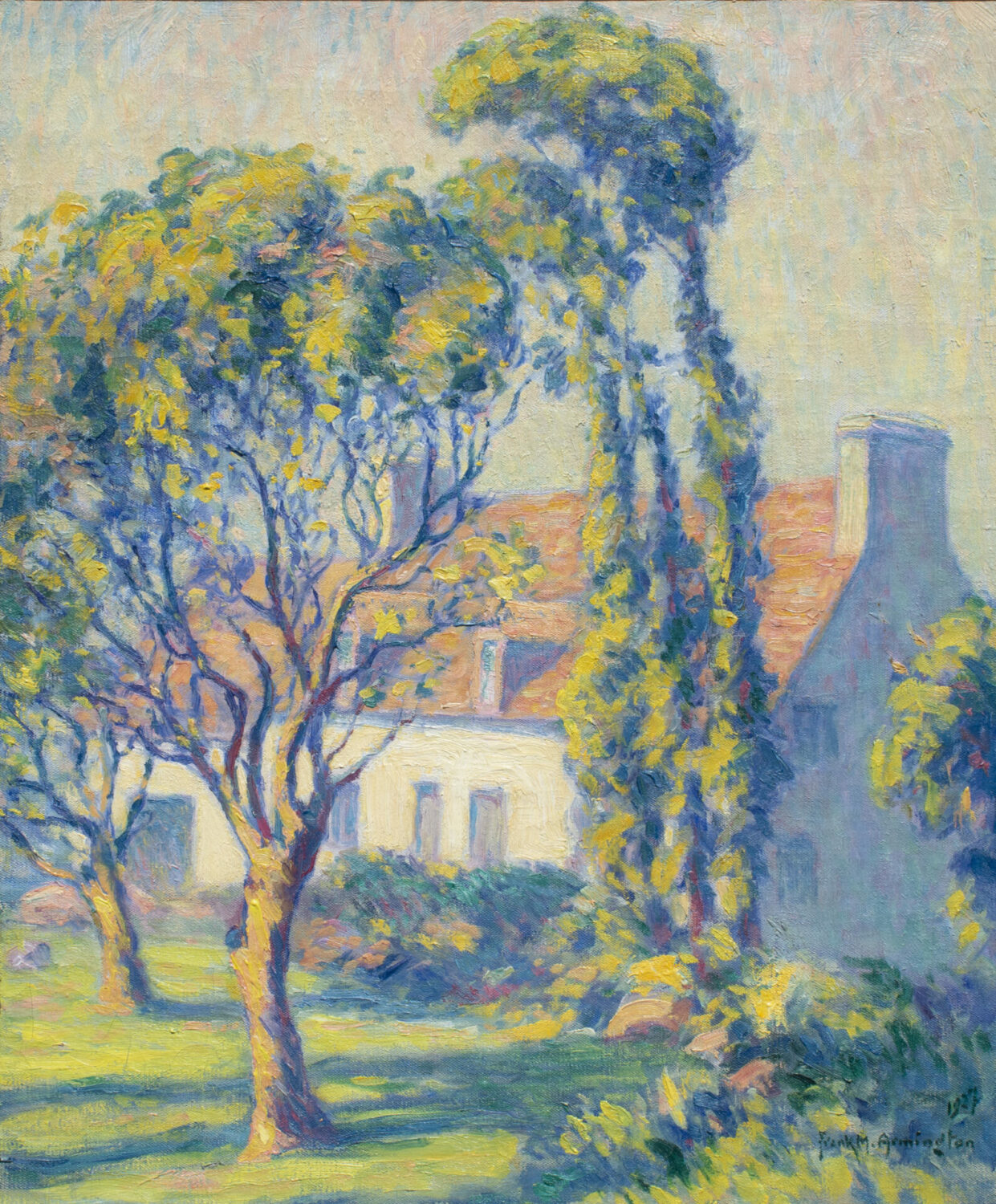 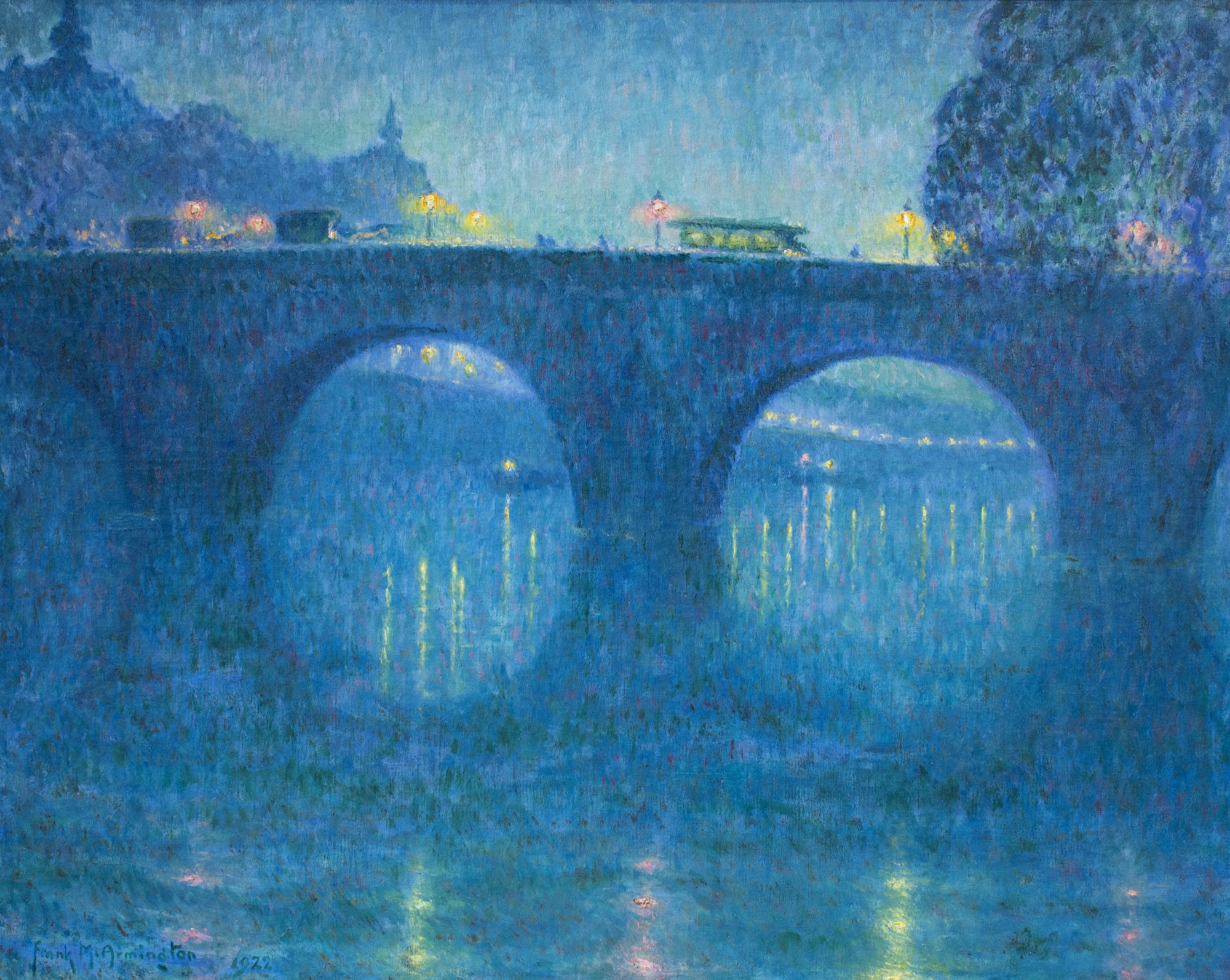