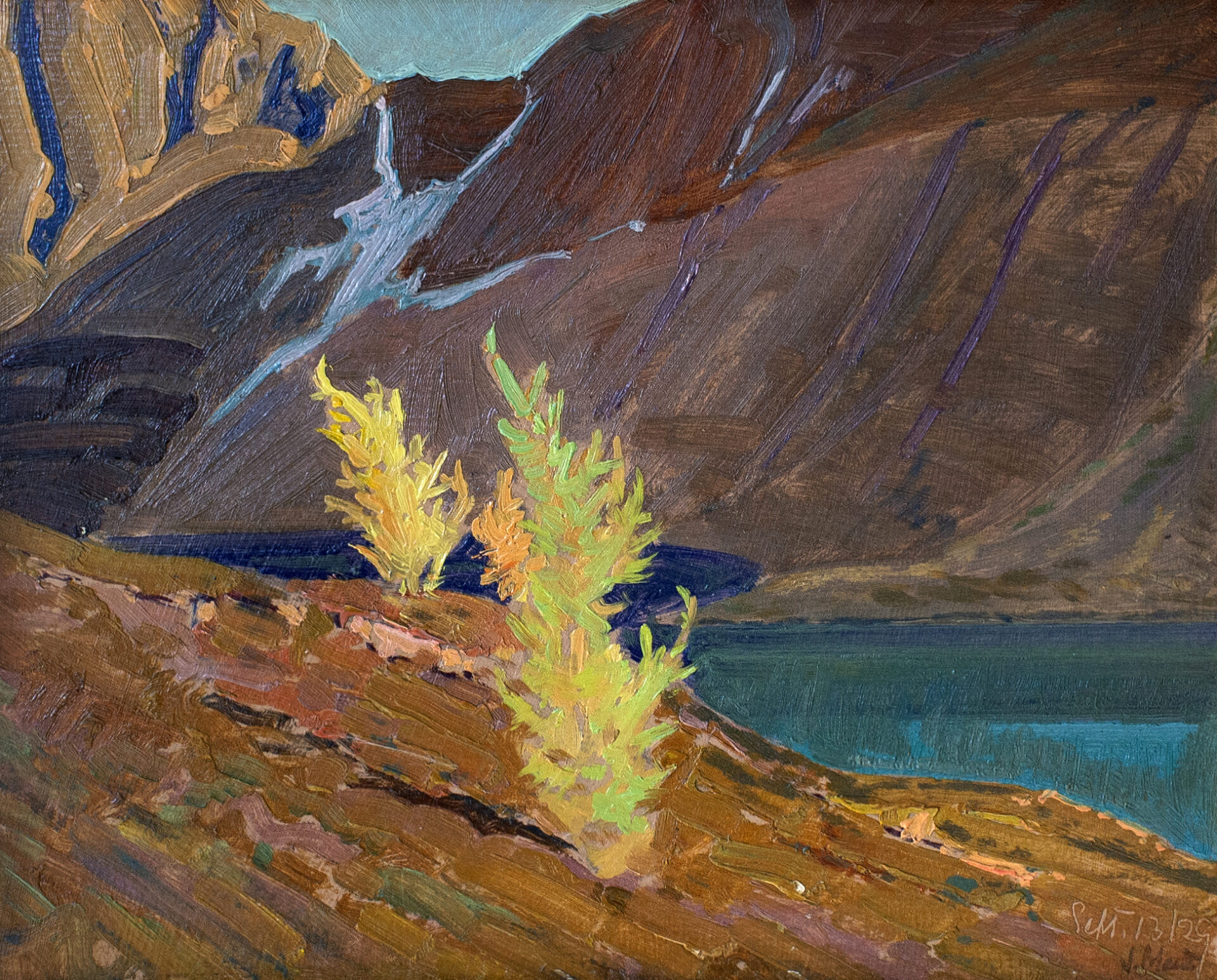 1929 was J.E.H. MacDonald’s sixth visit to the Lake O’Hara region of Yoho National Park, British Columbia, in the Rocky Mountains of western Canada. He was obsessed with the scenery there, and that year, his attention was taken by the larch trees. He arrived in early September (as we know from a sketch painted on the 5th) to find the larches beginning to turn. The weather conditions that fall, his familiarity with the trails and meadows, and his utter delight in being back in place he so loved, combined to give us an artistic survey of the Lyall’s Larch in their fullest range of fine autumnal glory.

These uniquely charming, deciduous conifers have leaf-like needles that change colour in the fall. In MacDonald’s 1929 paintings we see in them dancing from shades of green through to gold, charting the transition of their bright, forest green leaves from their summer colours through an intense chartreuse green, then a pale lime green that then morphs into a softy buttery yellow, and finally ripens to a saffron orange over the winter as the four-sided leaves dry out and fall. Sprinkled on the early snow, or as seen in this work against the blue-green waters of McArthur Lake and the heath-crusted ground, they are a delightful and attractive colour contrast in the landscape. MacDonald further accentuates these two solitary trees by bathing them in sunlight that electrifies their colours and heightens our focus on them. They are actors, posing at centre stage. He underlines this focus by capturing the foreground tree’s deeply cast shadow in a rich brown tinged with purple that is not only reminiscent of the greyish-purple of larch bark, but repeated in
the shadow on the rock face on the far side of the lake, drawing our eye up to the mountain face. MacDonald was a superb colourist who used a minimal palette of carefully chosen hues in a simple
composition. The purple accents in Larches and Mountain Lake serve to intensify the colour of the larches, and together with his calligraphic brushwork, and stage-like view, create a scene that
is enlivened and bright. One can almost feel the breeze tousling the supple branches of these two young larch trees.

MacDonald was not only visually taken by these unique trees, he also wrote about them in his journals, even composing poems, odes to their kaleidoscopic fall colour. In his 1924 lecture “A Glimpse of the West”, delivered to his students at the Ontario College of Art and published that November in The Canadian Bookman, he wrote of his affection of the O’Hara landscape, singling out the larch trees, “…and there are the trees, the spruce and the balsam and the plumy Lyall’s Larch. This last especially a beautiful colour note in my memory as it began to get the gold of autumn on it before I came away, and that, with the delicate purple grey of the branches mingling with it made a dream tree of paradise.” In the fall of 1928, he wrote a poem in his journal, describing the advance of fall colour up from the prairies to the mountains:

The turn of the larches in the Canadian Rockies is a visually delightful time, one that MacDonald was harmoniously in tune with, one that he painted and wrote of often – a reoccurring character in his Lake O’Hara stories. The shoreline of McArthur Lake, where these two trees are growing in the sketch, is today dotted with older, larger, specimens and their younger offspring. It is likely that among them, gnarled and wizened and shaped by the weather, stand these two same trees, now almost a century older.

In the autumn of 1918 Group of Seven members J.E.H. MacDonald, Lawren Harris and Frank Johnston, made the first of their renowned boxcar trips to Algoma with patron Dr. MacCallum. Lawren Harris was able to convince the Algoma Central Railway to lend them a boxcar, which was sidelined from the…

In the autumn of 1918 Group of Seven members J.E.H. MacDonald, Lawren Harris and Frank Johnston, made the first of their renowned boxcar trips to Algoma with patron Dr. MacCallum. Lawren Harris was able to convince the Algoma Central Railway to lend them a boxcar, which was sidelined from the tracks at convenient sketching locations. The boxcar was used as lodgings and studio and was complete with bunks, tables and chairs, a stove, and painting materials. There was also a canoe and a handcar for short distance travel. The boxcar was bright red and numbered 10557 on the side in big black lettering. Over the doorway were mounted sprays of evergreen and the motto: Ars Longa Vita Brevis (meaning Art is Long, Life is Brief).

These trips were taken at a time when the Group of Seven members were strongly unified in their goals to create a distinct nationalistic style of landscape art. They were heavily under the influence and stylistic guidance of their recently deceased dear friend and fellow artist Tom Thomson. Armed with memories of their friend, the artists felt a strong sense of artistic purpose; therefore the work from their Algoma sketching trips can be considered quite artistically and emotionally charged.

MacDonald in particular was captivated by the Algoma landscape. A.Y. Jackson later remarked, “I always think of Algoma as MacDonald’s country. He was awed by the landscape and he got the feel of it in his paintings.” 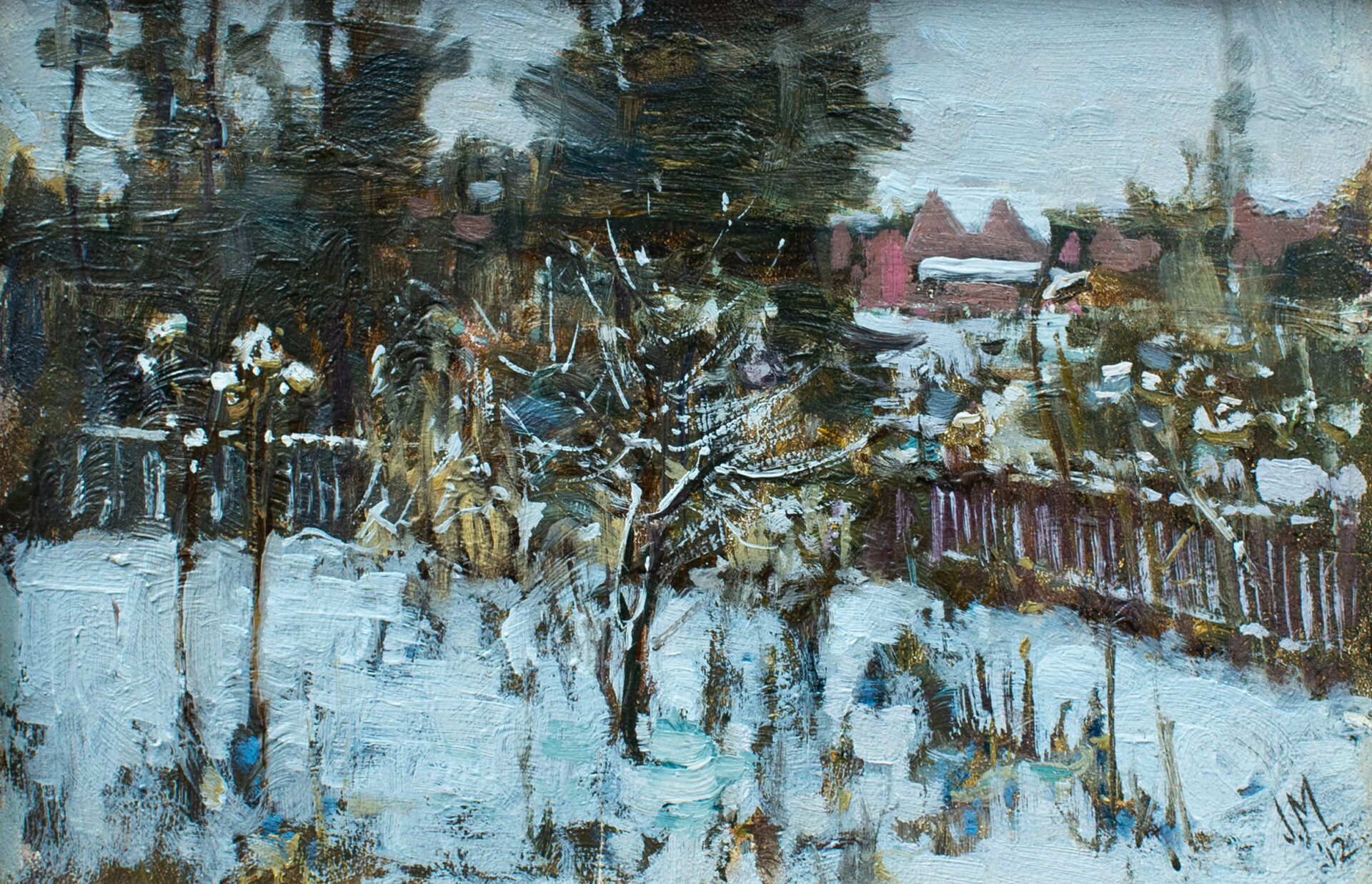