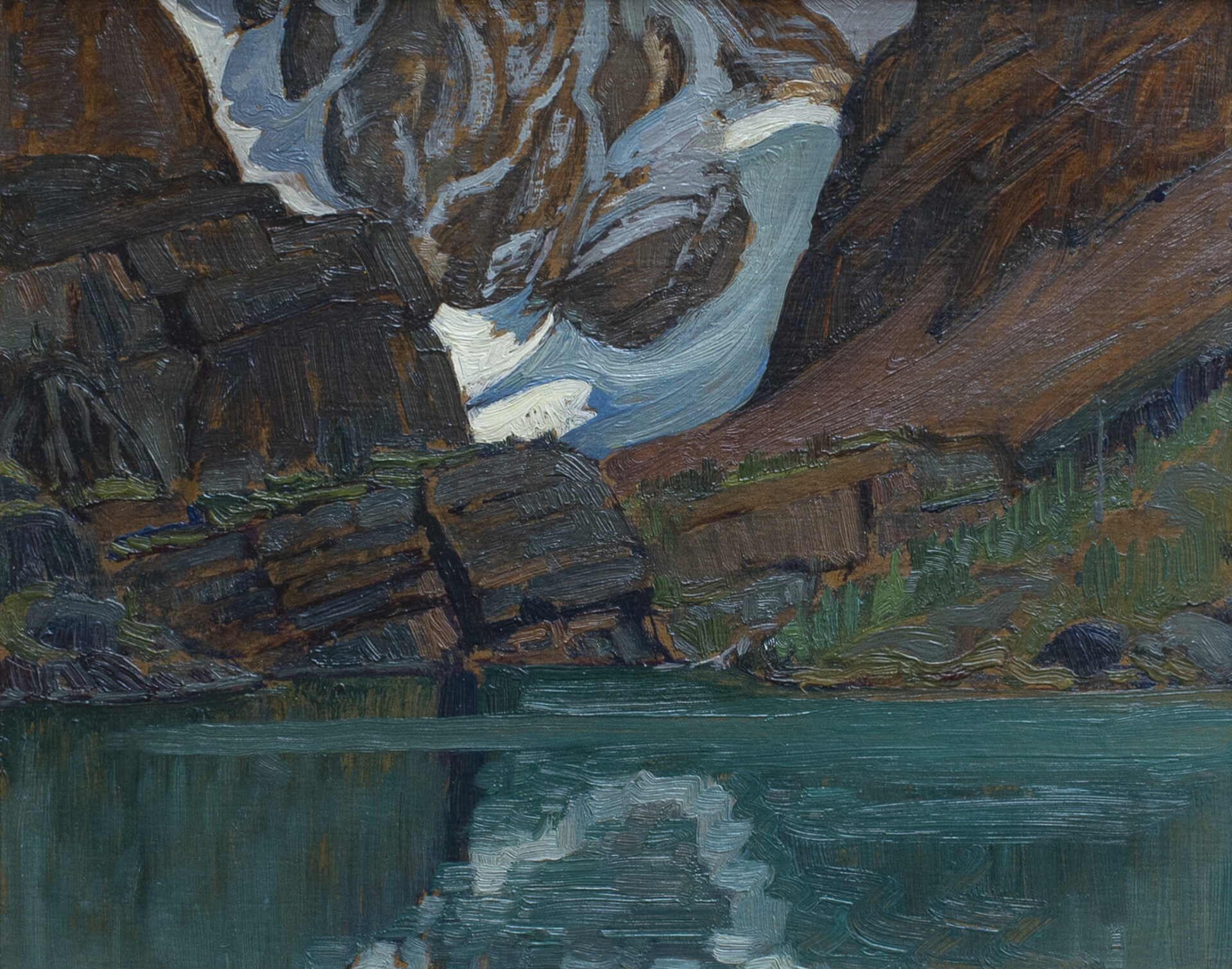 Provenance
Collection of E.R. Hunter, author of J.E.H. MacDonald: A Biography and Catalogue of His Work (1940);
Private collection, Calgary

J.E.H. MacDonald’s artistic allegiance to the scenery of Lake O’Hara is evident in the variety of locations he accessed, the different vistas he painted, and the full sampling of Canadian Rockies
weather he captured them in. This brilliant scene is a sunlit gem of a work, depicting a spot painted not only by MacDonald, but by his fellow founding Group of Seven members, Arthur Lismer and
Lawren Harris. Today, we call the small tarn he has depicted Lefroy Lake. Hikers familiar with the Lake O’Hara trail system will know this appealing spot well, it is one of the many charming small
lakes that dot the trailside while you are ascending to, or descending from, Lake Oesa. It is an idyllic spot, beckoning hikers to stop for tea, or to rock hop to the little lake to just to sit, and spend some
time watching the shadows play across the glaciers on the mountains above.

MacDonald has captured the scene in brilliant hues, the sun paints the glacier that sweeps down under the shoulder of Mount Ringrose – the central peak – a clear, clean white. Swirling blue
serpentine shadows describe the rugged profile of the peaks above. A tiny triangle of sky nips in at the top of the work just right of centre, showing us the steepness of the mountain’s incline, and
hinting at the sun that we know is shining above. The distinctive rocky bluff below and to the left of the glacier is a bedding plane of ancient rock, crusted with colourful lichens so characteristic of
the O’Hara region, and cracked into huge blocks by the forces of ice, water, and time. At Lefroy Lake, water flows in by Karst as well above ground in a stream, making for an increased variety of
colour possibilities. Lake O’Hara is renowned for her spectacularly coloured lakes, and Lefroy Lake is one of the finest jewels in the Lake O’Hara crown.

MacDonald’s palette in this work is extremely rich, and conveys the lushness of this spot well, it is awash in blue and green, and tied together with an earthy brown, the latter colour being so saturated that it begs the question of whether the work might have been painted immediately after a rain. Indeed, all seems as if wet, the colours intense, the richness heightened. In his journals, MacDonald describes many instances of hiding out from bad weather in the lee of a rock or under a tree, and then hurrying to capture the scene as sunshine returned. These were moments
MacDonald revelled in, loving the wildness of it all, and seeking to capture the essence of the moment. It is as if curtains have been drawn back, revealing Mount Ringrose at centre stage. But it
is in the water in the foreground where MacDonald’s technique really sings. He presents one side of the small lake – the left third – as a smooth sheet of glass, and the other two-thirds – demarcated by the upside-down refection of the curved glacier – as a dance of colour on water stirred by a slight breeze. Of a similar moment not far from this spot, in his 1930 Lake O’Hara journal, he wrote, “…
such delicacy of shadow on Lefroy… and such beauty of colour in lake. The lighter poem of wind breaking, the vividness of blue green where sun touches smooth water and blending of smooth
water in light from dark blue-green to fullness of green near foreground. Try painting for this effect.” It is an O’Hara moment, a Canadian Rockies moment, one that tells us this painter spent
time observing, that his desire was to capture a truly authentic portrait of the everchanging face of nature, to paint the quickly fleeting flashes of beauty in the natural world, ones that stand out, that truly speak of wind, weather, rock, and water, and the lighter poems of wind breaking.

This work comes through the collection of Edmund Robert Hunter, one of J.E.H. MacDonald’s early biographers. Hunter published his book on MacDonald, including a catalogue raisonne of his work, in 1940. It would later be redesigned by MacDonald’s son Thoreau and
reissued in a 1949 edition of 500.

In the autumn of 1918 Group of Seven members J.E.H. MacDonald, Lawren Harris and Frank Johnston, made the first of their renowned boxcar trips to Algoma with patron Dr. MacCallum. Lawren Harris was able to convince the Algoma Central Railway to lend them a boxcar, which was sidelined from the…

In the autumn of 1918 Group of Seven members J.E.H. MacDonald, Lawren Harris and Frank Johnston, made the first of their renowned boxcar trips to Algoma with patron Dr. MacCallum. Lawren Harris was able to convince the Algoma Central Railway to lend them a boxcar, which was sidelined from the tracks at convenient sketching locations. The boxcar was used as lodgings and studio and was complete with bunks, tables and chairs, a stove, and painting materials. There was also a canoe and a handcar for short distance travel. The boxcar was bright red and numbered 10557 on the side in big black lettering. Over the doorway were mounted sprays of evergreen and the motto: Ars Longa Vita Brevis (meaning Art is Long, Life is Brief).

These trips were taken at a time when the Group of Seven members were strongly unified in their goals to create a distinct nationalistic style of landscape art. They were heavily under the influence and stylistic guidance of their recently deceased dear friend and fellow artist Tom Thomson. Armed with memories of their friend, the artists felt a strong sense of artistic purpose; therefore the work from their Algoma sketching trips can be considered quite artistically and emotionally charged.

MacDonald in particular was captivated by the Algoma landscape. A.Y. Jackson later remarked, “I always think of Algoma as MacDonald’s country. He was awed by the landscape and he got the feel of it in his paintings.” 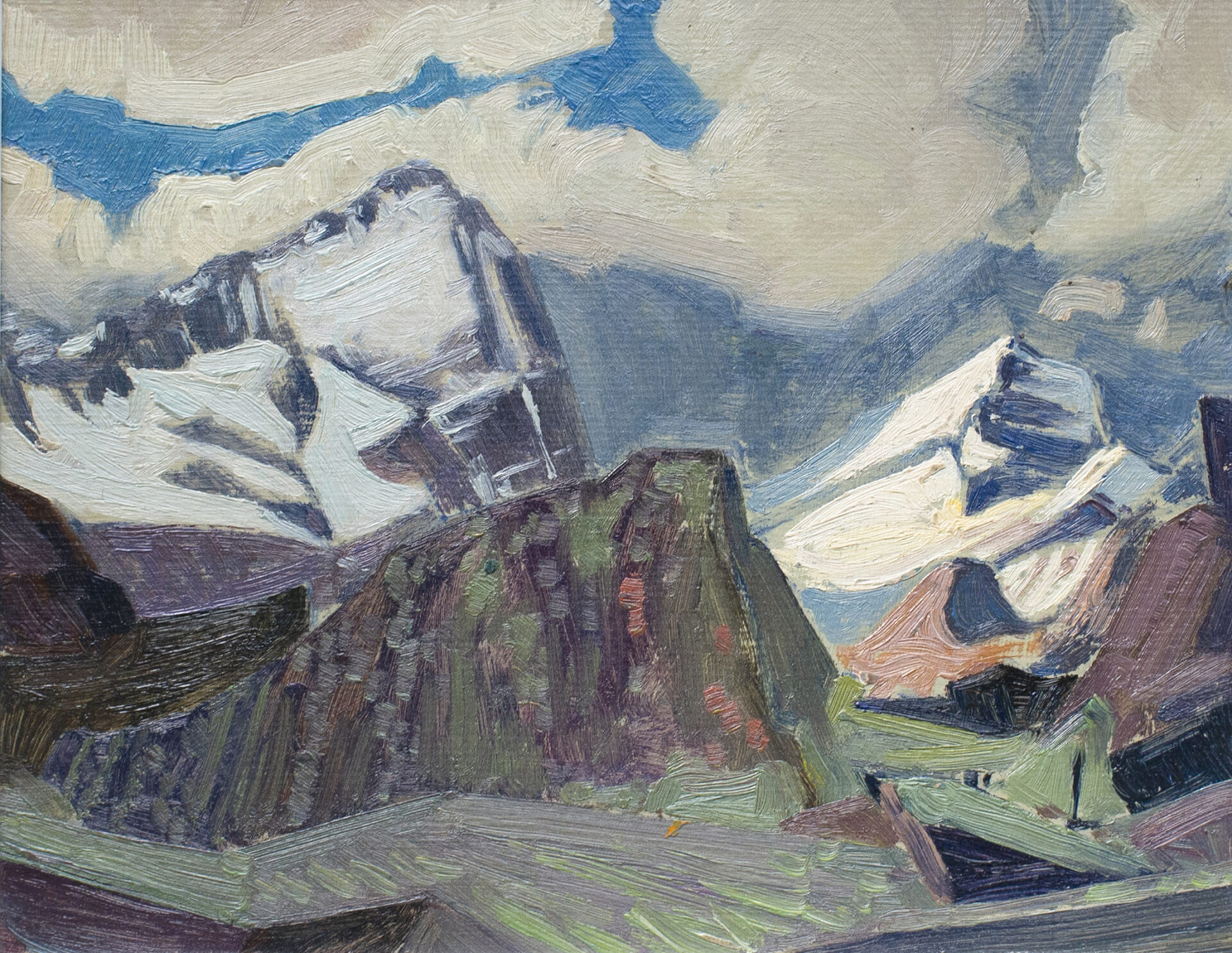