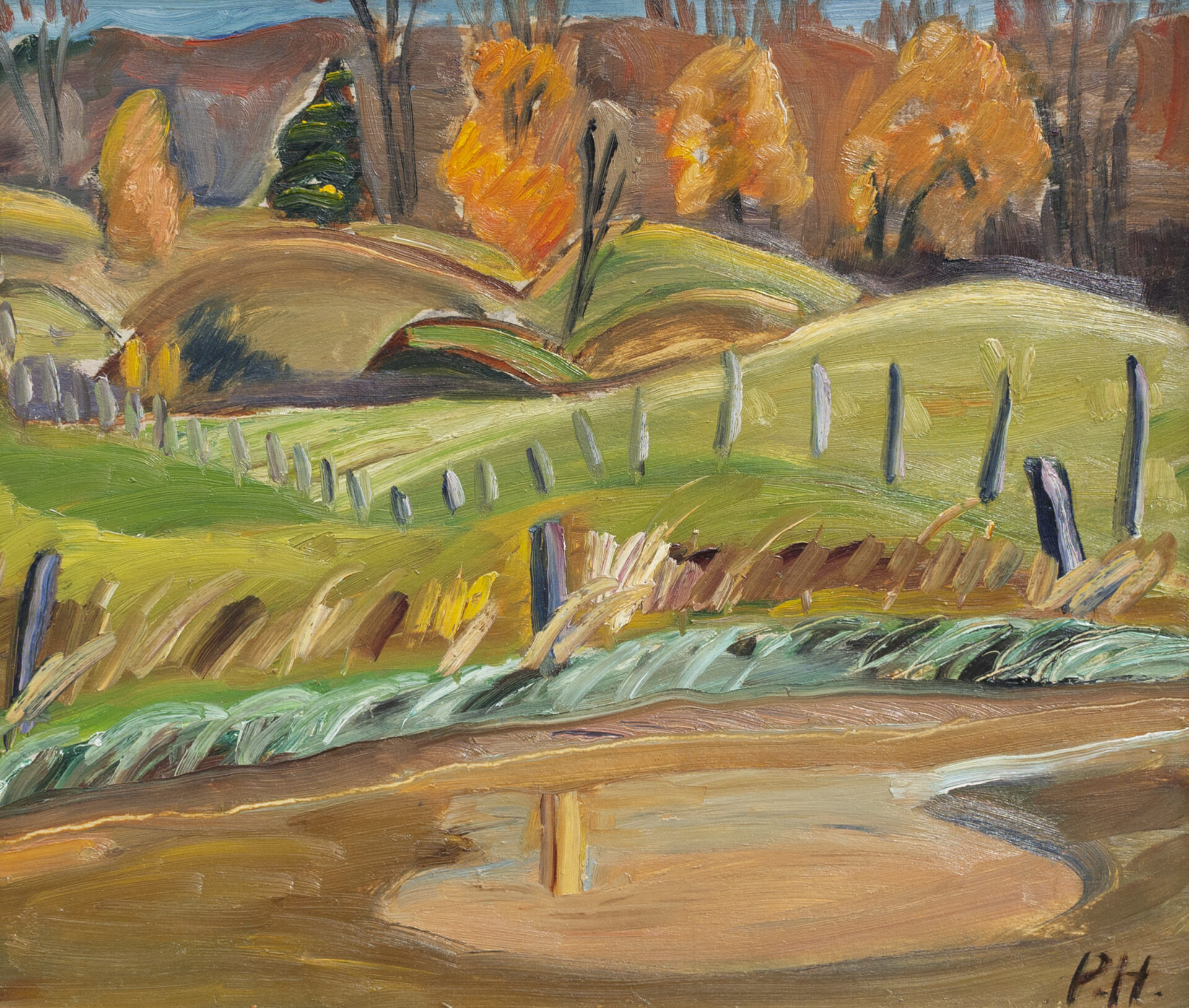 Prudence Heward took multiple trips throughout rural Quebec over the course of her career, where she produced plein air panel sketches of the landscape. The early 40s were a challenging time for Heward, who suffered life-long health afflictions made worse by a 1939 accident, and then lost her sister in 1943 – this all throughout the societal turmoil of the Second World War. The artist struggled through her personal challenges, and despite them she continued to produce work (the countryside was also likely a welcome escape). Cowansville, Quebec remains an important cultural hub for the Beaver Hall artists and their contemporaries. Lillias Torrence Newton lived there near the end of her life, as did much of Heward’s extended family. To this day, the Musée Bruck in Cowansville holds an impressive collection of Beaver Hall and A.Y. Jackson works.

Born Efa Prudence Heward in Montreal, Quebec, Canada into a well-to-do family, she was educated at private schools. At a young age, she showed an interest in art and, encouraged by her family, she attended the Art Association of Montreal school for training. During World War I, Heward lived in…

Born Efa Prudence Heward in Montreal, Quebec, Canada into a well-to-do family, she was educated at private schools. At a young age, she showed an interest in art and, encouraged by her family, she attended the Art Association of Montreal school for training.

During World War I, Heward lived in England where her brothers served in the Canadian Army while she served as a volunteer with the Red Cross. Returning to Canada at war’s end, she continued her painting and joined the Beaver Hall Hill Group. In 1924 her works were given their first public showing at the Royal Canadian Academy of Arts in Toronto, Ontario. However, it was still an era when women artists were given little credibility and it wasn’t until 1932 that Heward’s first solo exhibition came at the Scott Gallery in Montréal.

Wanting to refine her skills, and drawn to the great gathering of creative genius in the Montparnasse Quarter of Paris, France, between 1925 and 1926 Prudence Heward lived and painted in Paris. While studying at the Académie Colarossi, she frequented Le Dome Café in Montparnasse, the favorite haunt of North American writers and artists and the place where Canadian writer Morley Callaghan came with his friends Ernest Hemingway and F. Scott Fitzgerald.

While in Paris, Heward met Ontario painter Isabel McLaughlin with whom she became friends and would later join with her and other artists on nature painting trips. In 1929 her career got a major boost when her painting, Girl on a Hill, won the top prize in the Governor General Willingdon competition organized by the National Gallery of Canada.

She was invited to exhibit with the Group of Seven and through it became friends with A. Y. Jackson with whom she would go on sketching excursions along the Saint Lawrence River. While she did a number of landscapes, with a particular attachment for Quebec’s Eastern Townships, Heward is most recognized for her portraits that provide compelling representations of women and children including the five nude subjects she painted of which four were black women.

In 1933, Prudence Heward co-founded the Canadian Group of Painters, but her struggle with asthma and other health problems eventually slowed her down. A 1939 automobile accident curtailed her abilities further but she still produced some outstanding portraits until 1945 when her health had deteriorated to the point where she had to give up painting. She died two years later, while seeking medical treatment in Los Angeles, California.