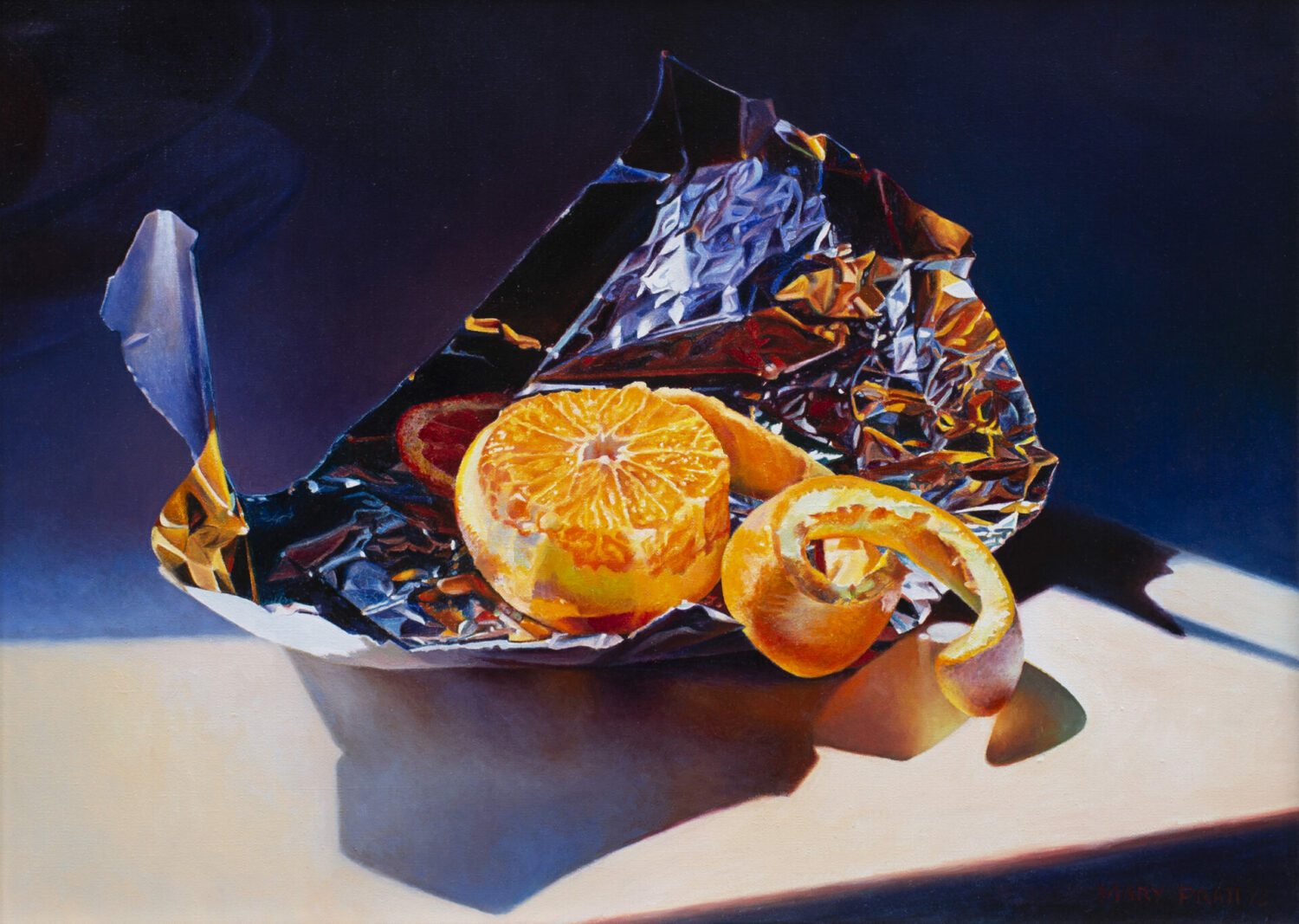 signed and dated lower right
signed and titled to verso

Mary Pratt’s colour and high realism are well known aspects of her work. It is the joining of these two, combined with her way of framing each scene, that really causes her work to sing. Simple subjects: an overripe banana in a glass bowl, jars of jam made translucent by sun on a windowsill, and here, a slice of an orange, partially peeled and lying on a curl of tinfoil are made exquisite, rendered sacred, as if to belie their simplicity. They become objects of veneration, icons.

She described the colours she used in an article that was published in Canadian art upon her death in 2018: “Titanium White, Cadmium Pale Yellow or Lemon Yellow, Cadmium Red Light, Cadmium Orange, Permanent Rose, Alizarin Crimson, Ultramarine Blue, and Permanent Deep Green. I sometimes use Mauve, but only lately. I never use black except in watercolour; it takes the dance out of the painting, the dance that colour gives you. Instead, I mix up three dark colours.” In the background of Orange on Tinfoil, we have Ultramarine Blue mixed with Alizarin Crimson and white, a remarkable feat of painting, wherein a shadow, and the various reflections of it on tin foil play in dance of iridescence.

Mary Pratt’s work is subtle and nuanced, yet universal in its subjects. To say that they are simple denies her fastidious and complex understanding of them, her care in selecting, arranging, and painting them. Her ability to see beyond the hierarchy of subject matter and move past that with pure artistic skill was her first and foremost quest. Orange on Tinfoil is an extraordinary feat of painting, wherein he artist’s understanding of colour and composition, the play of light from orange, to table to tin foil, and the sense of stillness that permeates the work give us an orange as icon, a memento mori of the kitchen, a classical modernized still life.

Mary Pratt was born in 1935 in Fredericton, New Brunswick. As a fine arts student at Mount Allison University, Pratt was mentored by Alex Colville. Mary Pratt’s work represented a snapshot of a woman’s domestic life, creating highly realistic and dramatic still life works that were inspired by her surroundings.…

Mary Pratt was born in 1935 in Fredericton, New Brunswick. As a fine arts student at Mount Allison University, Pratt was mentored by Alex Colville. Mary Pratt’s work represented a snapshot of a woman’s domestic life, creating highly realistic and dramatic still life works that were inspired by her surroundings. In 1996, she became a Companion of the Order of Canada, and in 2013 she became a member of the Royal Canadian Academy of Arts. Pratt passed away in Newfoundland in August of 2018.