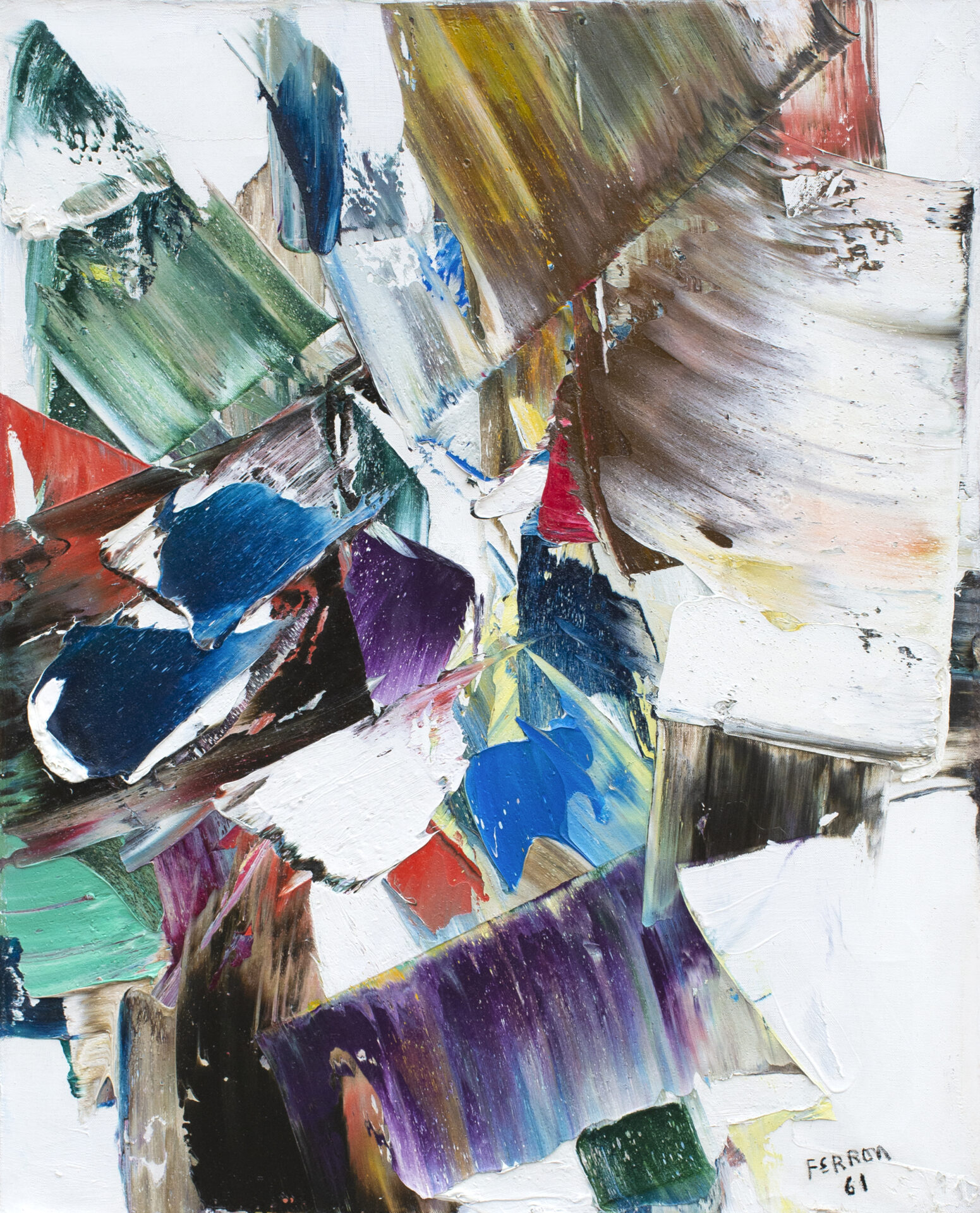 Marcelle Ferron was a trailblazer. An activist, outspoken and driven, she believed in the powerful language of colour and felt that it made universal connections where other aspects of art might not. Her paintings are strictly pictorial in their language, abstraction for her was about materials, space, and colour. Her interest in pure, rich colour took her to France in 1953, where she began to use white heavily, and to thicken her surface with layered-on paint manipulated with a palette knife in multi-directional strokes. She was careful not to overpower her whites with too much colour, allowing them to offset rather than overpower the white. She had the great fortune of being given a quantity of dry pigment by a paint manufacturer in Paris that she reground and mixed with either linseed, castor, or poppy oil to suit her needs. These pigments came in fifty pound bags, allowing her to increase the size of her works as well.

This untitled work from 1961 shows us her care in the preservation of white in her application of paint. While the knife is heavily loaded and many other colours appear, we still have passage of pure white, set off brilliantly against blue, purple, green and red.

Marcelle Ferron, artist (b at Louiseville, Qué 29 Jan 1924; d at Montréal 18 Nov 2001). Sister of Jacques Ferron, she was an active participant in Les Automatistes, led by Paul-Émile Borduas, and has pursued an innovative artistic career, where her work in stained glass is noteworthy. After studying at…

Marcelle Ferron, artist (b at Louiseville, Qué 29 Jan 1924; d at Montréal 18 Nov 2001). Sister of Jacques Ferron, she was an active participant in Les Automatistes, led by Paul-Émile Borduas, and has pursued an innovative artistic career, where her work in stained glass is noteworthy. After studying at the École du Meuble in Montréal and the École des beaux-arts in Québec City, Ferron became part of Les Automatistes, signing that association’s polemical manifesto, Refus GlobalL. Her nonfigurative paintings were hung in all the major Automatiste exhibitions. She lived in Paris 1953-66 and continued to show in avant-garde exhibitions, including the 1961 Sao Paulo Biennial, where she won the silver medal.
The paintings of this dynamic artist became progressively more forceful. Vibrant colours and larger, fluid forms dominated the canvas. After 1964 her interest in light was effectively translated into a new medium – stained glass – examples of which can be seen in the Champ-de-Mars and Vendôme metro stations in Montréal. Ferron is represented in Canadian and foreign collections, including the Musee des Beaux Arts MOntreal. She was invested as a Grand Officer of the Order of Canada in 2000, the same year that the Musee d’art Contemporain held a restrospective of her work.
Author ANN DAVIS -The Canadian Encyclopedia