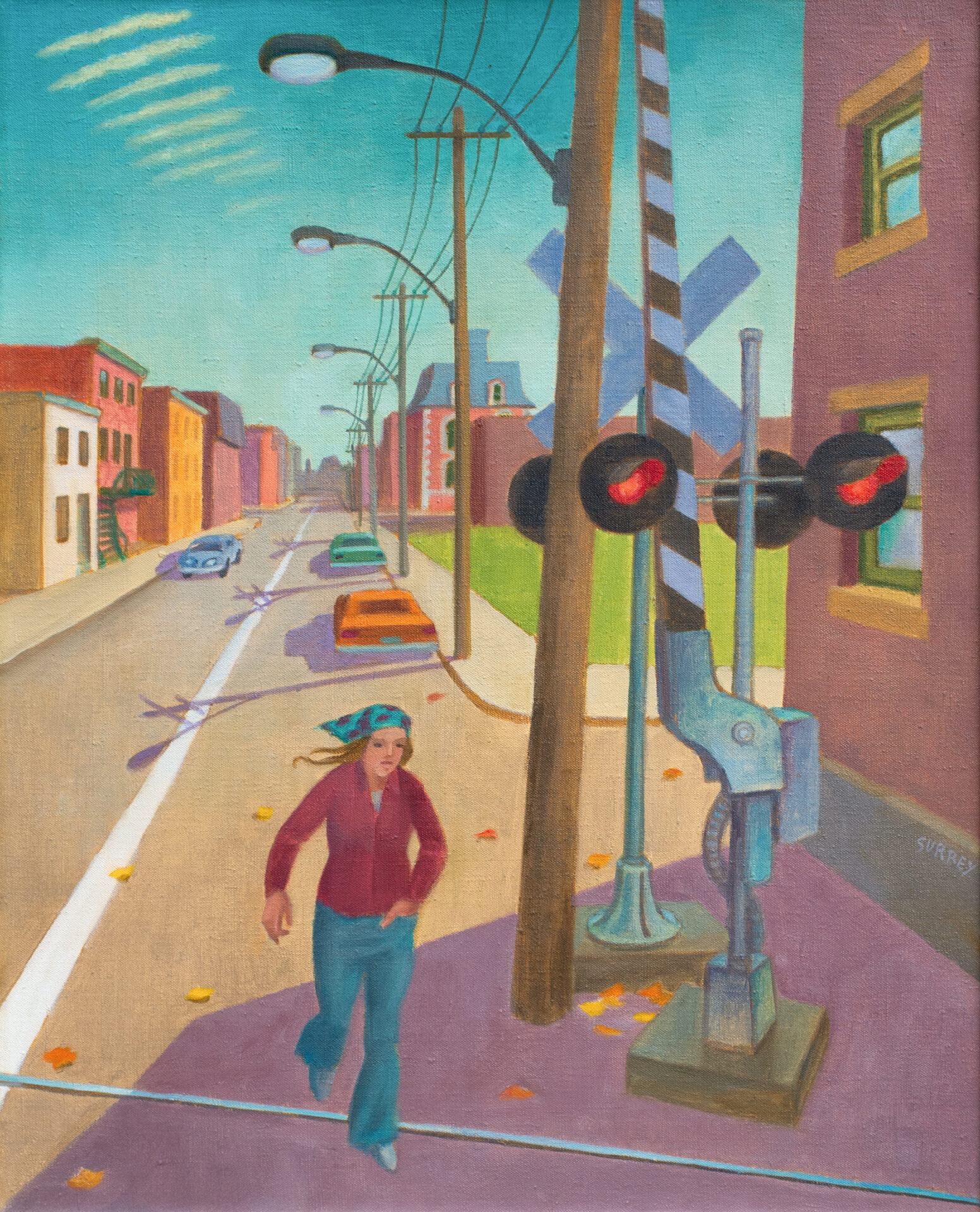 Philip Surrey paints moments in time, figures running, groups of people walking against the wind, the action of life in Montreal. Born in Calgary, he settled there in 1937 after a childhood spent travelling the world, living in luxurious hotels at exotic locations. This childhood would not have allowed for significant time in the company of other children, and he was instead surrounded by adults, which no doubt contributes to his keen interest in, and ability to observe the figure. “Like icebergs” he said, “four-fifths of our personalities lie below the surface; of the fifth that shows, only part can be expressed in conversation. The effective outlet for all deeper feelings and thoughts is art.”1 This is perhaps as autobiographical a comment as it is an observation of others. His figures, even when in groups, are always set apart from one another, alone and singular, with four-fifths of their individuality hidden from us.

Surrey’s depictions of Montreal are described as “poetic humanitarianism,” they are expressive of the modern city, with buses and cafés and busy street corners. They teem with life, but this is not the focus of Surrey’s works, instead the individual solitudes of each figure are at the core of his art. Sometimes obscured (when he shows us only partial figures – running legs, hats and hair caught in the wind) sometimes fully depicted – yet the individuality is still conveyed, trapped in its particular and unique reality.

Philip Surrey, a founding member of the Contemporary Arts Society, was a figurative painter with an enduring interest in human subjects within urban nightscapes. For most of his career, Surrey used Montreal as his stage, arranging lighting and figures – most often pedestrians – in compositions that revealed both the…

Philip Surrey, a founding member of the Contemporary Arts Society, was a figurative painter with an enduring interest in human subjects within urban nightscapes. For most of his career, Surrey used Montreal as his stage, arranging lighting and figures – most often pedestrians – in compositions that revealed both the gregarious nature and the solitude of humanity. A friend and student of Frederick Varley, Surrey was also closely tied to many of the most important Montreal artists and writers of the 1930s and 1940s.

Philip Surrey began his art training in Winnipeg at age sixteen, when he took an apprenticeship at Brigdens commercial art firm. There, he met Fritz Brandtner. In the evenings, he took classes at the Winnipeg School of Art under LeMoine FitzGerald and George Overton. It was at this time that he started painting the streets and people of Winnipeg after dark, by the light of streetlamps and restaurants. He moved to Vancouver in 1929 and took a job as a commercial artist at Cleland-Kent Engraving. In night classes at the Vancouver School of Decorative and Applied Arts, he studied with Frederick Varley and Jock Macdonald. Surrey left Vancouver in 1936 and spent three months at New York’s Art Students League, studying under Frank Vincent Dumond. The following year, he settled in Montreal and found work at the Standard newspaper. He continued to paint in evenings and on weekends and became immersed in the art scene, rekindling his friendship with Brandtner and befriending John Lyman, Goodridge Roberts, Jori Smith and Jean Palardy.

Surrey built a successful 25-year career at the Standard and its successor, Weekend Magazine. Then, in 1964, publisher John McConnell offered Surrey the opportunity to paint full-time under salary. Surrey accepted, and continued to work as a salaried artist for twelve years, mounting numerous solo shows and signing an exclusive contract with Galerie Gilles Corbeil.

Surrey’s earliest work shows the influence of Varley, with its lyrical, sensuous form and colour, as seen in Going to Work (1935). Later in the 1930s, his approach showed a greater concern with society and human realities, especially the effects of the Depression. This is evident in The Red Portrait (1939), with its image of a solitary sitter and tense mood. The Young Ladies of the Village (after Courbet) (1966) reveals Surrey’s lifelong interest in classical painting.

Philip Surrey was awarded the Centennial Medal (1967). He held an honorary doctorate form Concordia University (1981), and was a member of the Order of Canada (1982).