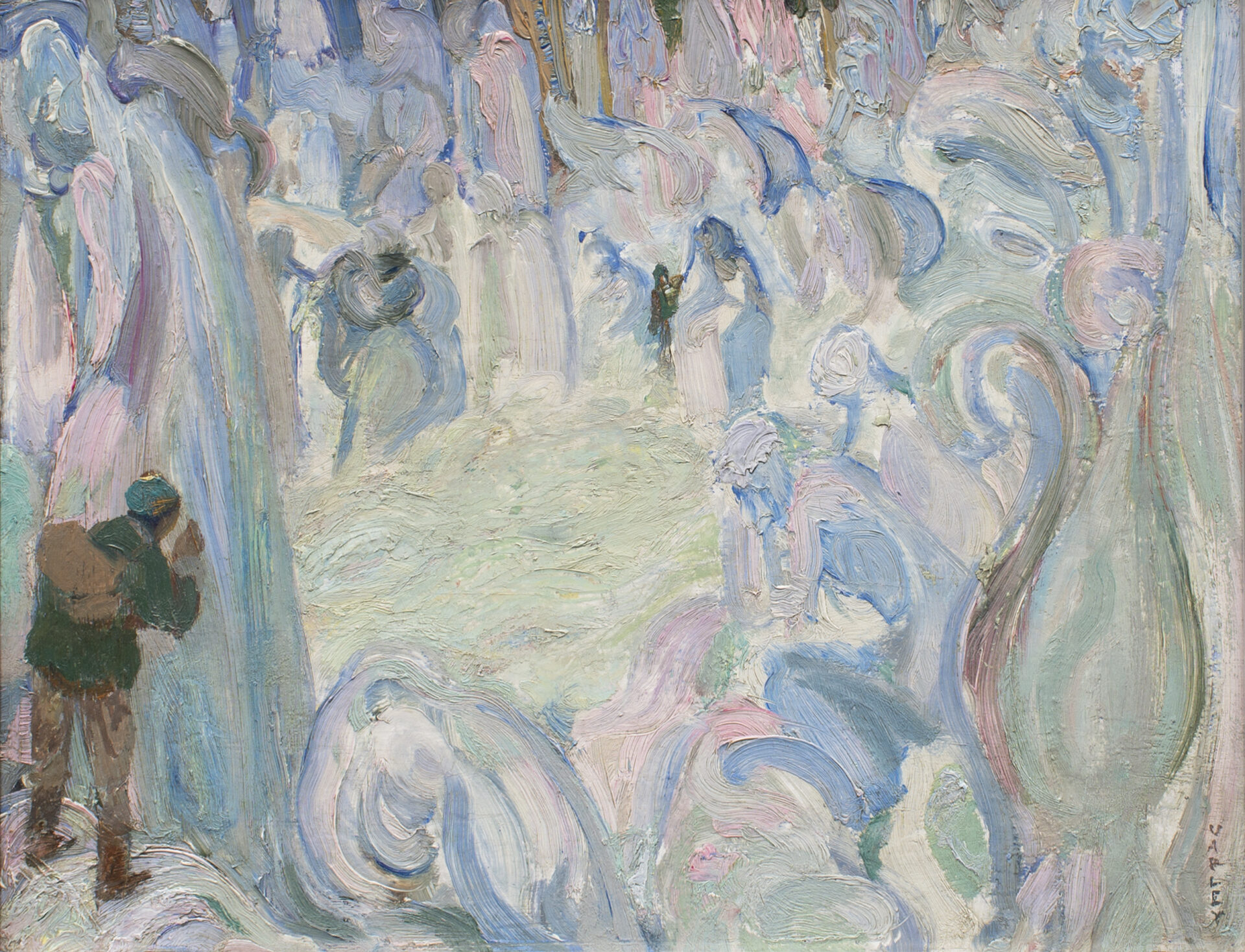 titled and signed with artist’s address to verso
Varley Inventory no. 13, label to verso

Frederick Varley’s whimsical and imaginative work Snow People depicts a group of what we assume are children, playing in a forest heavily encrusted with snow. It is possible that these figures include his son John, and that this work was painted in British Columbia, where he moved in 1924 and where John accompanied his father on a number of sketching trips. Other works known to be of John approximate the age and stature of the figure with his back to us, hiding behind a snow-covered tree. This is speculation though, not proven by any fact. The only facts we do have are that this is a joyous work, with rich swirls of delicious colour, and a sense of pure delight in this winter wonderland of snow. Almost abstract, the trees take the form of crouching angels, and the figures hiding amoung them are caught in a magical, marvelous, dream-like, white world.

Varley was indeed a virtuoso colourist, his works often seem to contain an inner glow, sometimes golden – as we see in his portrait of his son John, sometimes green – as with his portrait of Vera from 1930, or red, as with his Gypsy Head from 1919. (All these works, National Gallery of Canada). Here, in this exuberant scene, the inner glow is white, emanating from a surreal forest of swirling colour and winter form.

Frederick Horsman Varley, painter (b at Sheffield, Eng 2 Jan 1881; d at Toronto 8 Sept 1969). In early life he spent much time in the English countryside and became intensely spiritual, finding God in nature, not in the church. He received a solid art education, first at the Sheffield…

Frederick Horsman Varley, painter (b at Sheffield, Eng 2 Jan 1881; d at Toronto 8 Sept 1969). In early life he spent much time in the English countryside and became intensely spiritual, finding God in nature, not in the church. He received a solid art education, first at the Sheffield School of Art (1892-1900), then the Académie royale des beaux-arts in Antwerp, Belgium (1900-02) where he studied original paintings by Rubens. After unsuccessful starts at careers as an illustrator and art teacher in England, Varley immigrated to Canada in 1912. Through Arthur LISMER, a Sheffield friend who had moved to Canada a year earlier, he found employment as a commercial illustrator in Toronto and befriended Tom THOMSON and Frank CARMICHAEL. In 1918 Canadian War Records commissioned Varley to illustrate the war in Europe. He painted several portraits in England and made 2 trips to France. The 4 large war scenes that resulted were critically acclaimed and brought him to the forefront of painters in Canada. In May 1920 Varley became a founding member of the GROUP OF SEVEN. He did not share the Group’s enthusiasm for the Ontario landscape, however, and during the early 1920s attempted to make a living as a portraitist. The family of Vincent MASSEY commissioned several, but Varley made little money and in 1926 began to teach at the Vancouver School of Decorative and Applied Arts. During the next 10 years he painted hundreds of landscapes in oil and watercolour, marked by fine draftsmanship, exotic colour, unusual vantage points, and after 1933 by metamorphosis of forms. In 1933, he and J.W.G. MACDONALD opened their own school, the BC College of Arts. Though it was well attended, it closed after 2 years, a victim of the Depression. By 1936 Varley was broke, and moved to Ottawa to try to resume his career as a portraitist. During the next 9 years he drifted between Ottawa and Montréal, making few paintings, except in 1938 when he travelled to the Arctic on the government supply ship Nascopie. In 1944 he returned to Toronto and, in 1948-49, taught at the Doon Summer School of Fine Arts near Kitchener. In 1955 he made a sketching trip to Cape Breton, and in 1957 the first of several more painting trips to BC. Romantic and independent, Varley was known as the “gypsy” of the Group of Seven. His gifts as a colourist, draftsman and intimate observer of life are best displayed in both his drawings and small watercolours. Author: Christopher Varley