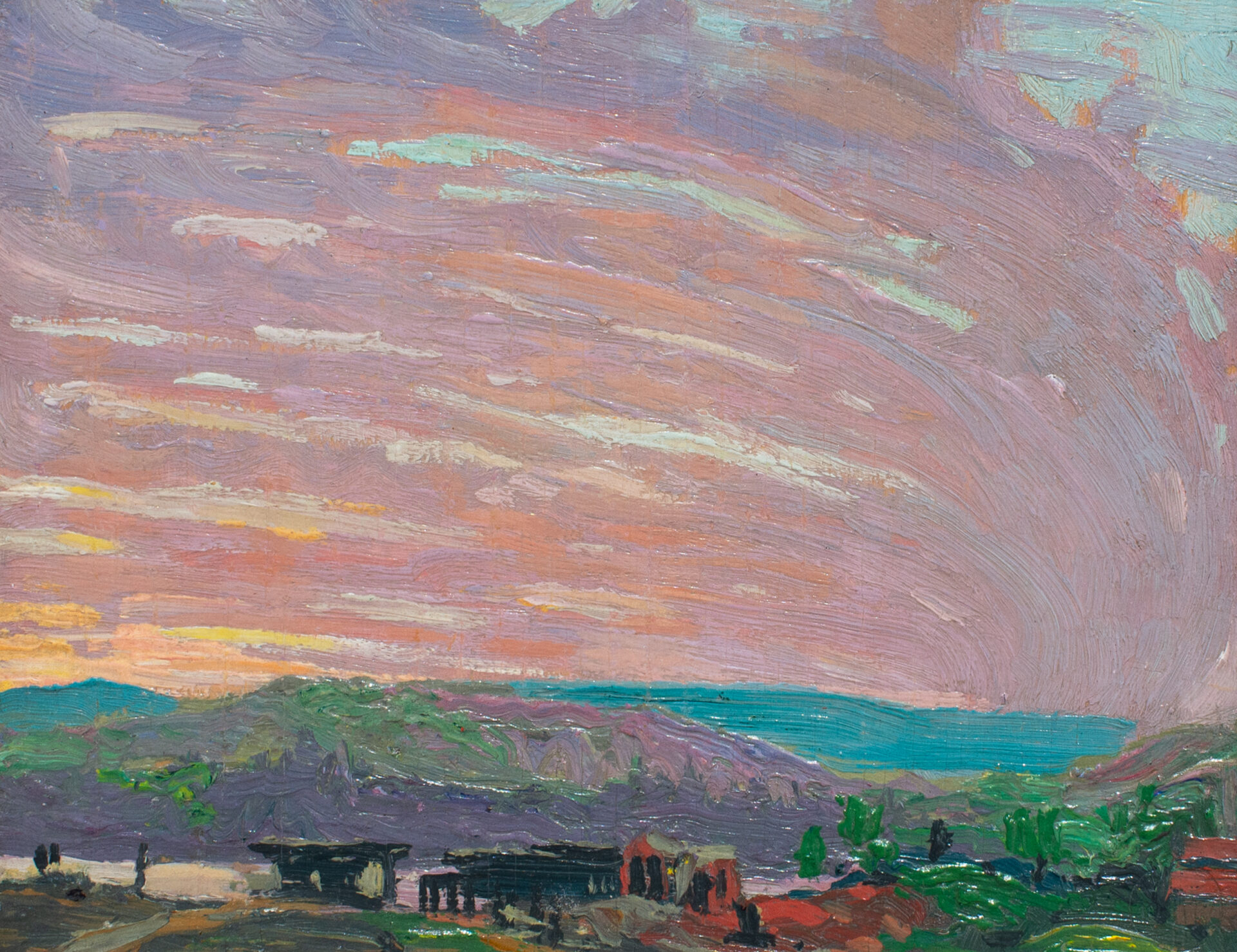 The short painting career of Tom Thomson has garnered more scrutiny, more study, and has generated more intrigue than many Canadian artists with much longer and more prolific careers. While
his life, and especially his death, are fascinating stories with chapters yet to be written, it is the work itself that drives this continued scholarship.

Tom Thomson was an unhesitating painter. Without pretence or self-consciousness, his art developed quickly, and on fertile ground that was shaped largely by his periods of self-isolation and
tenacious drive. Spring, Algonquin Park is a moody, saturated work, touched with red and yellow, and brilliant in its colour. Joan Murray relates the work to Canoe Lake, Algonquin Park, painted the following fall, (1916.131). Both are rich studies with dominating, agitated skies. In Spring, Algonquin Park, the majority of the composition is taken up by sky, which, despite the fact that it is more simply painted than the buildings, hills, and water on the land, dominates through sheer visual force. Tour de force
might be a better term, as the sky’s presence overshadows everything else in the scene, swirling, as it seems to, up and out of the lake and into the atmosphere.

The summer of 1914 saw Thomson working at Algonquin Park alone in early August. He arrived there by canoe, having left Georgian Bay to paddle and portage via the French River, Lake Nipissing, and the South River into the park. Jackson would join him at Canoe Lake in mid-September, and they would work there, as well as at both Ragged and Smoke Lakes, returning back to Canoe Lake
by October, when the Lismers (Arthur and Esther, and their daughter Marjorie), and Frederick and Maud Varley would join them. From all reports, Thomson’s work was praised, Jackson writing, “Tom is doing some exciting stuff. He keeps one up to time. Very often I have to figure out if I am leading or following.” While A.Y. Jackson is often cited as an influence, J.W. Beatty’s lead cannot be ignored. In Thomson’s skies, his swirling wild brushwork, his propensity for night time scenes, and his authenticity to the scene, the influence of Beatty is strongly felt. Both of these painters also influenced Thomson’s methods, and in the winter of 1913-1914, Thomson constructed for himself a sketching box based on
those used by Beatty and Jackson, replacing his heavier 1912 box with this new, light weight one. It held three 8 .5 x 10.5 inch wooden panels, which he would begin using (instead of canvas glued to boards) in the summer of 1914. We know from the Thomson catalogue raisonné that this work comes from that period, and in fact depicts summer, not spring and may have been executed that August, before Jackson arrived.