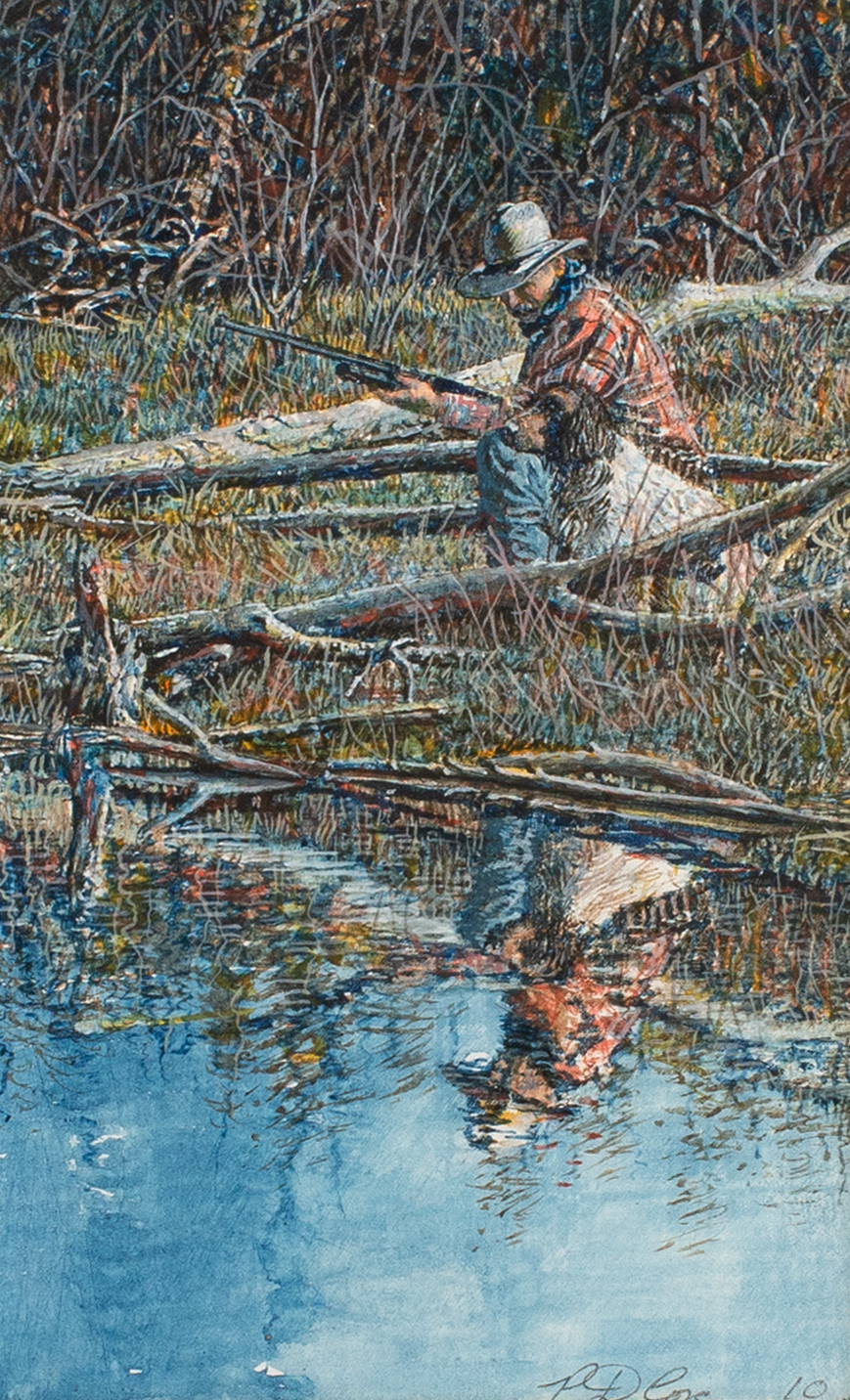 Study for the Conversation

After graduating from the Alberta College of Art, Patrick Cox co-founded a successful illustration and design studio. In 1982 he left the business to paint full time. Painting with remarkable precision and detail, Cox has established a reputation as a high realist. This style suggests literal representation, yet is markedly…

After graduating from the Alberta College of Art, Patrick Cox co-founded a successful illustration and design studio. In 1982 he left the business to paint full time.

Painting with remarkable precision and detail, Cox has established a reputation as a high realist. This style suggests literal representation, yet is markedly interpretive. Working from a foundational concept, Cox does not hesitate to manipulate the elements of composition until only the essential details, shaped to his purpose, remain.

While the intellectual framework underlying a painting is important to Cox, he is not heavy-handed with thematic elements, preferring subtleties that leave viewers free to interact with his work on a personal level.

In human subjects Cox looks not for shallow charm or glamour, but for depth and uniqueness of character. Capturing and intensifying a select moment, his paintings seem to strip away the noise and busyness of life, leaving only the still essence of something humanly significant. The artist’s ability to find the extraordinary in an ordinary scene makes his paintings compelling.

Cox’s art is strongly tied to the land and history of the west, as is his life. In 1880, his Great Grandfather Malcolm Millar traveled up the Missouri River by steamboat to Fort Benton, Montana, and then overland to Canada’s Fort Walsh to join the North West Mounted Police. After serving during the North-West Rebellion, Millar homesteaded near Calgary. He married Helen Shaw who, riding in an oxcart, had come west to Fish Creek with her family in 1883 ahead of the railroad. The spacious log home of Malcolm and Helen became a popular social gathering place, eventually giving rise to the community of Millarville, which adopted the Millar family name.

The artist’s paternal grandfather, Orville Cox, came west in 1897, and married Mary Sophia Aldridge, whose family had arrived in 1888. Orville and Mary farmed a homestead at Twin Butte, where Orville also served as community blacksmith.

Of similar significance is Cox’s maternal Grandfather, Leslie Victor Douglass, who as a young man worked winters for legendary Alberta (then North West Territories) cowboy John Ware before purchasing a ranch of his own.

Keenly aware of the richness of his family history, Patrick Cox today retains title to the Douglass ranch’s original quarter section and building site. It is the milieu of this rural heritage that provides Cox with much of his artistic inspiration.

But his art does not reflect the stylized, romantic west of popular mythology. Cox’s vision is more authentic. Whether in the ruggedness of an age-gnarled hand, the strength of character underlying a sun-creased face or even in his softer depictions of youth, Cox’s focus tends toward the unaffected, deeper qualities of life. Unpretentious dignity, the reflective moment and the links between past and present are themes that appear often in Cox’s paintings. 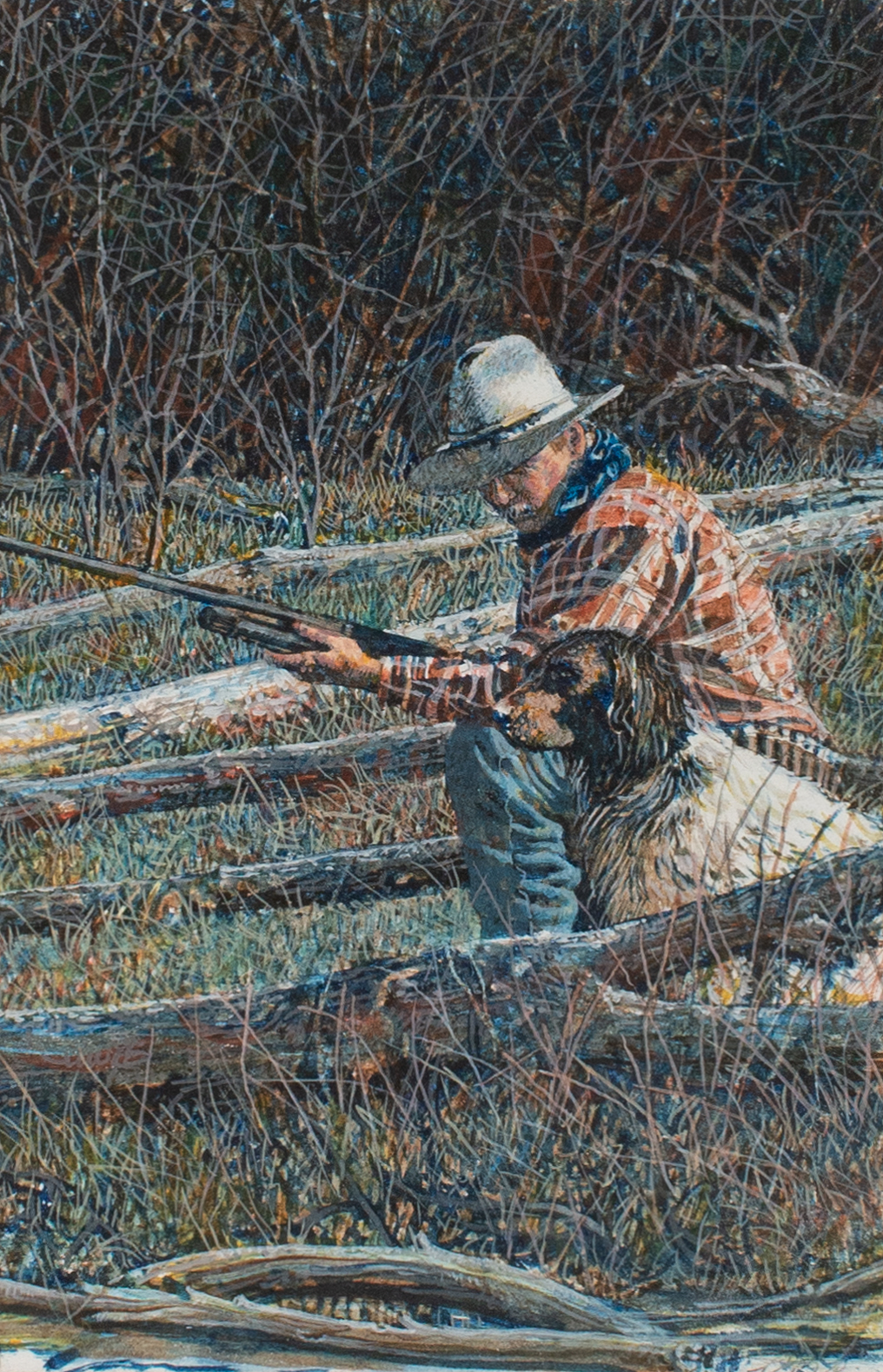 Study #2 for The Conversation