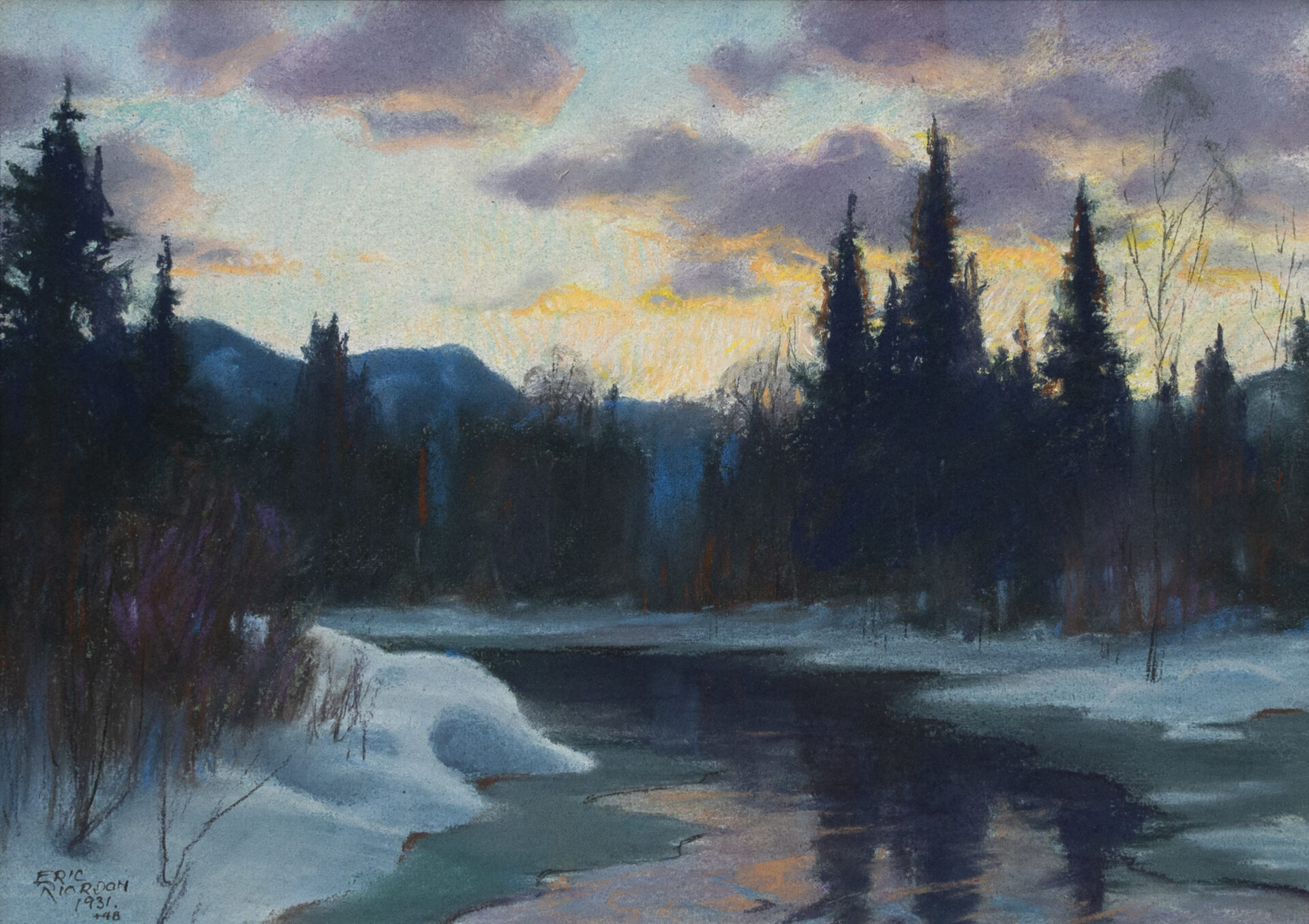 (1906-1948) Born in St. Catharines, Ontario, the son of Mr. & Mrs. Carl Riordon, his family moved to Montreal in 1908. He was educated at Ashbury College, Ottawa, and McGill University, Montreal. After studying charcoal drawing for a year at the Ecole des Beaux Arts, Montreal, he went to Paris…

Born in St. Catharines, Ontario, the son of Mr. & Mrs. Carl Riordon, his family moved to Montreal in 1908. He was educated at Ashbury College, Ottawa, and McGill University, Montreal. After studying charcoal drawing for a year at the Ecole des Beaux Arts, Montreal, he went to Paris in 1932 where he trained at the Grande Chaumière and Académie Julian, then travelled and painted extensively in Europe. His work was shown at the Paris Salon (1933,1934). On his return to Montreal he painted in the Laurentians where he had spent many summers of his youth at the Riordon family cottage north of Mont Tremblant at Lac Lache. During the thirties he became known for his fine paintings of the Laurentians. He held his first official solo show at the Continental Galleries in October of 1935. He also became known for his seascapes, beach, harbour and river scenes having found his subjects in Brittany, France, and elsewhere in Europe, also in North America, up the St. Lawrence, in Gaspé, Nova Scotia and Maine. He had an early interest in the sea and in 1940 joined the R.C.N.V.R.; took a seven month training course to become Lieutenant and served as executive officer in Montreal before being posted to the East Coast for sea duty. He was promoted to second in command of a corvette engaged in anti-submarine and convoy duty. At the end of the war he held the rank of lieutenant-commander in the Naval Reserve. He snatched moments from his duties during this period to paint a series of wartime marines later used for a publication about the Canadian Navy at war. Thirty-four of his miniature sea paintings portraying a typical trans-Atlantic convoy run during the Battle of the Atlantic were exhibited across Canada. Following his discharge from the Navy he built a house on a hill-top near Ste. Adèle where he painted many of his Laurentians. He was elected A.R.C.A. in 1946 and exhibited with the Academy from 1937 until his death. Viewing his work in 1939 critic St. George Burgoyne noted, “Especially happy is he in those winter scenes where hills throw shadows across lonely valleys and the setting sun flushes the distant ridges. His landscapes at all seasons do not lack the human interest – skiers score the snow, men may chop wood for hungry stoves, horse and wagon may top the rise of a country road, and where the landscape is white and deserted the smoking chimney of a country home hints at occupation, shelter and warmth.” He died at the age of 43 and was at that time survived by his wife, the former Mollie Usher-Jones; two sons, Eric and Michael Riordon, his father and mother, two brothers, Hal and Peter Riordon and two sisters, Mrs. Peter Bennett and Mrs. Gordon Forbes and other more distant relatives.