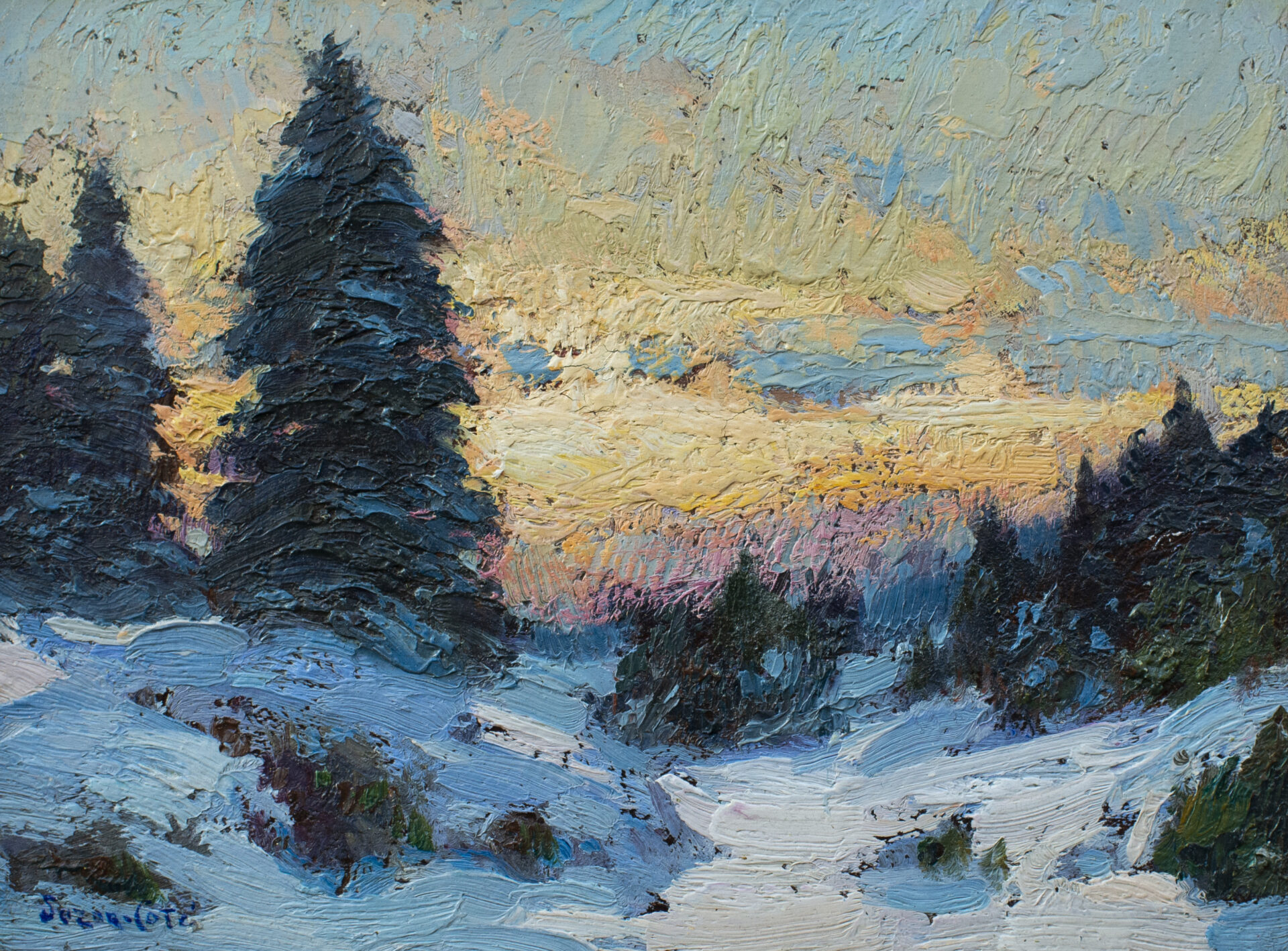 Arthabaska County in Quebec, north of Sherbrooke and south of Quebec City, was a place of great significance to Suzor-Coté. It was the place of his birth, and a place that he painted repeatedly. Sunset in Arthabaska shows us Cote’s command of colour. The deepest blues of winter shadows, pink and yellow tinged sky and his characteristic heavily built up surfaces combined to give us works that are stellar examples of Canadian Impressionism in the hands of a skilled painter trained in the Barbizon school. The National Gallery of Canada included this panel in their 2002 retrospective of Suzor-Cote’s work, Suzor Coté: Light and Matter.

Marc-Aurèle de Foy Suzor-Coté, painter, sculptor, church decorator (b at Arthabaska, Qué 5 Apr 1869; d at Daytona Beach, Fla 27 Jan 1937). Suzor-Coté’s highly successful career was the result of his sure talent, his extroverted personality and favourable circumstances. In secondary school, his talent for drawing attracted attention and…

Marc-Aurèle de Foy Suzor-Coté, painter, sculptor, church decorator (b at Arthabaska, Qué 5 Apr 1869; d at Daytona Beach, Fla 27 Jan 1937). Suzor-Coté’s highly successful career was the result of his sure talent, his extroverted personality and favourable circumstances. In secondary school, his talent for drawing attracted attention and in 1887 he became involved in the church decoration projects of the Joseph Rousseau company of St-Hyacinthe. Through family connections he met Wilfrid Laurier, from whom he secured numerous commissions.

He led a cosmopolitan existence between 1891 and 1912, travelling constantly between Canada, the US and Europe. He studied in France (1891-94, 1897-1901) where he acquired sound training from Bonnat at the École des beaux-arts, and later from Harpignies, and in the open studios of Julian and Colarossi. From 1892 on, he attracted attention at exhibitions of the Art Assn of Montreal (he won the Jessie Dow award for Les fumées, port de Montréal in 1912), at the salons of the Société des artistes français in Paris as early as 1894, and at Royal Canadian Academy of Arts exhibitions. In 1901, William Scott and Son of Montréal became his dealer, spreading his popularity. Further European travels 1904-07 and 1911-12 firmly established his reputation.

As his fame grew, however, so did his desire for a more private life. After 1912 he worked in the Arthabaska studio he had built in 1895 and in his Montréal studio. He mastered pastels as well as oils, and in 1911 began developing his talent for sculpting, in which he excelled after 1918. In this medium he returned to the rural subjects of his canvases and, inspired by his surroundings or by literary works such as Maria Chapdelaine, he gave them new life. He was able to capture famous historical events as well as winter scenes with subtle use of colour and disciplined execution. A master artist, he had to abandon all his activity after becoming paralysed in 1927.