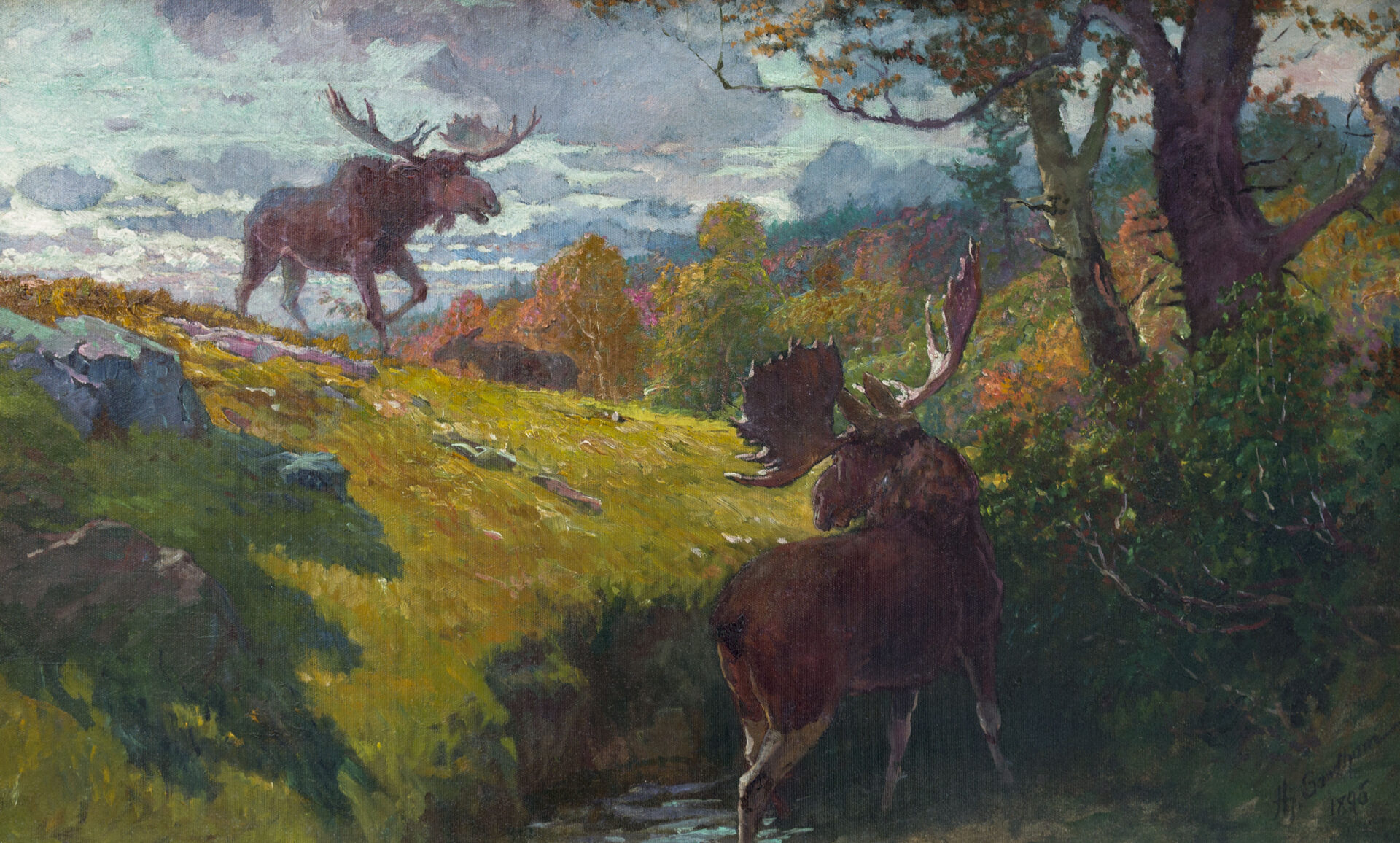 Henry Sandham’s father had a little house-painting business, in which his sons Frederick and Alfred were involved, in the Griffintown area of Montreal. Early in life Henry decided, against his father’s wishes, to pursue an artistic career, and the ensuing conflict forced him to fend for himself. At the age of 14, according to some oral sources, he took a job as an errand boy at photographer William Notman*’s Montreal studio, and at 18 he became the assistant there of John Arthur Fraser*; his name appears in the studio’s first pay-book in August 1864.

Notman had added an art department to his firm in 1860 and had placed it under Fraser’s management. Since there was no art school in Montreal, Sandham acquired his training in drawing, water-colours, and oil painting through his contact with Fraser and three artists who moved in Notman’s circle: Otto Reinhold Jacobi, Adolphe Vogt, and Charles Jones Way. A few years later he developed his skill in drawing the human figure by studying anatomy with a physician.

When Fraser left in 1868 to open the Toronto branch of Notman and Fraser, Sandham took his place as head of the art department. During the 1870s he refined the technique of producing the large composite photographs for which the Notman studio was famous. Individual photographs, posed according to a predetermined plan, were mounted on a painted background into which they blended. For one particularly ambitious composite, showing more than 300 members of the Montreal Snow Shoe Club on the slopes of Mount Royal, Sandham was awarded a silver medal at the universal exposition in Paris in 1878. He had become a partner of William Notman in September 1877 and the firm had been known since then as Notman and Sandham. The partnership was of short duration, however, coming to an end in 1882.

In addition to his work in the field of photography, Sandham also was involved in the artistic life of Montreal. As early as 1865 the Art Association of Montreal was displaying his works at its annual show. He was an active member of the Society of Canadian Artists, founded in 1867, and took part in the four exhibitions it held from 1868 to 1872. He also exhibited in 1874 and again between 1880 and 1885 at the Ontario Society of Artists in Toronto.

In 1877 Sandham illustrated his first article for the New York magazine Scribner’s Monthly. Called “Canadian sports” and written by William George Beers*, it was published in August and was followed in November 1878 by “Chambly Fort, on the Richelieu River,” which Sandham wrote and illustrated. In 1879 he undertook a large commission for the same magazine, doing the pictures for a four-part article written by George Monro Grant entitled “The Dominion of Canada” (May to August 1880). Such an important contribution to one of the leading monthlies of its type in the United States went a long way to establish Sandham’s reputation in the field. This period of intense activity in painting, illustration, and photography culminated in his being made a charter-member of the Royal Canadian Academy of Arts, founded in 1880; he exhibited his work there frequently for nearly 20 years.

In April 1880, after the academy had added to its constitution a clause establishing the status of honorary non-resident member, Sandham left for England. Although he stayed only a few months, he was able to make contacts in London and see paintings by masters at the galleries in France and England. In December he was in Boston to do a portrait that had been commissioned. For some time he had been trying to extricate himself from business in order to concentrate entirely on art. Through his skill as an illustrator, he apparently found an opportunity in Boston, and he settled there.

In addition to portrait commissions, Sandham did illustrations for books and periodicals. Towards the end of 1882 the Century Monthly Magazine (formerly Scribner’s Monthly) sent him to southern California with Helen Maria Jackson in her investigation into the living conditions of the Mission Indians. This journey led to a series of four articles that were published on his return in 1883, and to illustrations for Ramona (1900), the important best-selling novel she wrote. Sandham also painted several large historical canvases, including The dawn of liberty (1886) and The march of time (1890). During this period he exhibited regularly at the Boston Art Club and the American Water Color Society of New York and frequently at art shows organized by a number of other American associations, as well as at the world’s fairs in Chicago (1893), Atlanta (1895), and Nashville (1897).

Sandham left Boston in 1901 to live in London, England. He had just spent a few months in the Azores, where he had collected the material he needed for an illustrated article that came out in the London magazine Studio in December 1902. He pursued his career as an illustrator in this city and had several pictures accepted for the annual exhibitions of the Royal Academy of Arts, from 1905 to 1908. Sandham died on 21 June 1910 and was buried in Kensal Green Cemetery in London. A commemorative exhibition of his works was held at Earl’s Court in London from July to October 1911.

Illustration was the field in which Henry Sandham excelled. He was a keen observer and the depictions of the lands he knew at first hand – Canada, California, Haiti, the Azores – were among his best. His historical and imaginative subjects at times tended to be rather sentimental. Throughout his career Sandham maintained a close friendship with John Arthur Fraser, whose sister Agnes became his wife in 1865. He and Fraser were part of the landscape movement in painting that characterized Canadian art at the time of confederation, and his paintings and watercolours on Canadian subjects, including scenes of the St Lawrence River, the Gaspé, and the Maritime provinces, are the most outstanding of his works.