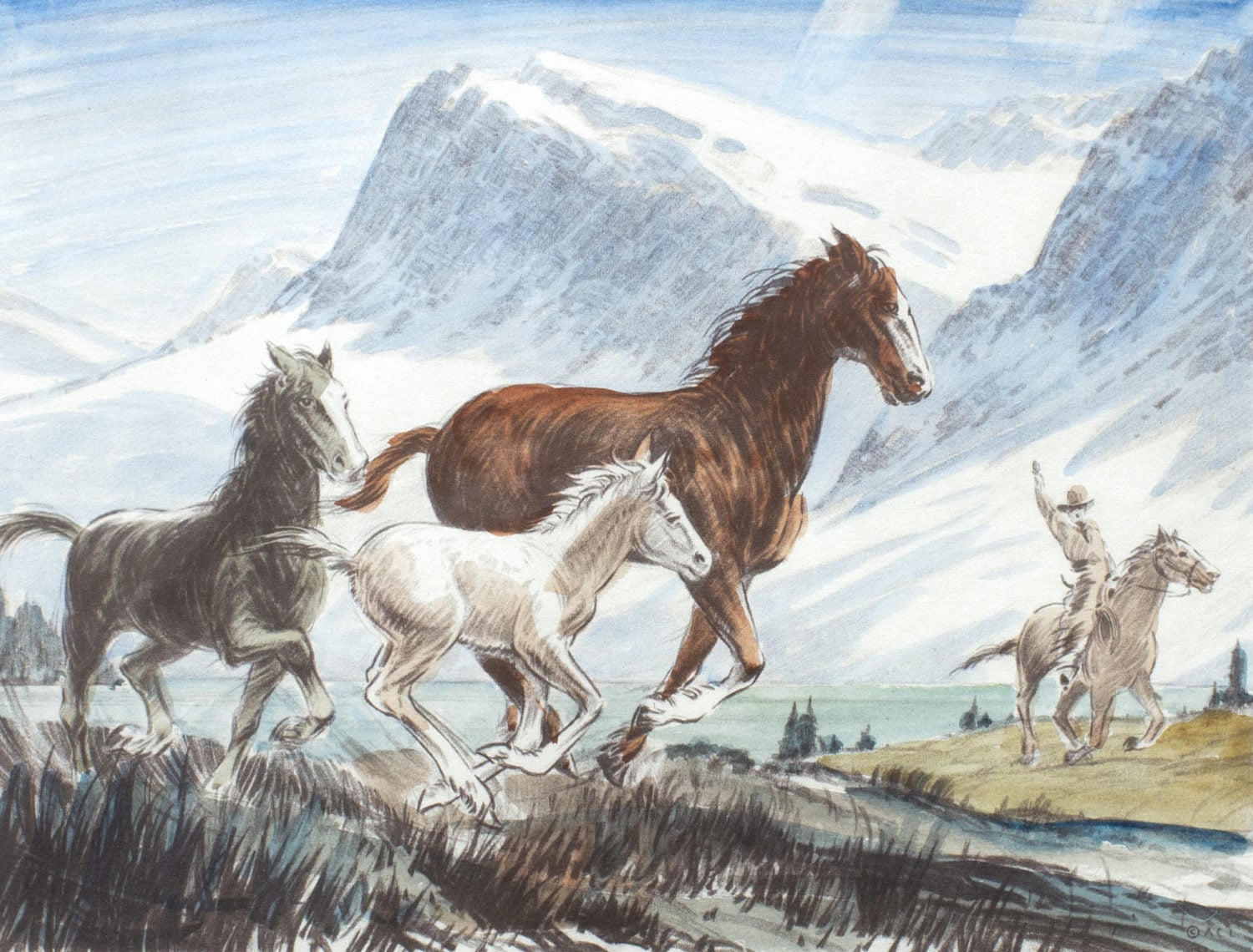 (1901-1965) Born in Hastings, Sussex, England, he received his formal education at Hastings and in London at the Hornsey School. He had no formal painting lessons but received advice and criticism from a friend, E. Leslie Badham, R.B. A. Leighton did paintings for a commercial organization. It was while he…

(1901-1965)
Born in Hastings, Sussex, England, he received his formal education at Hastings and in London at the Hornsey School. He had no formal painting lessons but received advice and criticism from a friend, E. Leslie Badham, R.B. A. Leighton did paintings for a commercial organization. It was while he was filling a commission for this firm at Mansion House and Temple Bar in London that Badham who had dropped in for a cup of tea, discovered his work and advised him to try for the exhibition of the Royal Society of British Artists.

Leighton entered two pictures in the exhibition and his work was well received. As a result he was elected an Associate of the Academy. He was in London from 1920 to 1927. During that period he taught classes, filled commissions and visited Canada in 1925.

On his second visit in 1928 he was commissioned by the Canadian Pacific Railway to paint a series of scenes of the prairies and Rockies. He travelled by pack train in the mountains making all his paintings out-of-doors. He spent most of the summer on the trail and then after a solo showing in Calgary where he sold twelve or so paintings, he arrived in Vancouver to continue the C.P.R. commission to paint scenes fo the C.P.R. docks, and of that city, also of Victoria.

He exhibited his work at the James Leyland galleries in Vancouver in the autumn of 1928 and by 1930 had settled in Calgary where among other things he was an instructor at the Institute of Technology and Art. In 1929 he became full member of the Royal Society of British Artists. he held an exhibition of forty-four watercolours in the Elizabethan room of the Hudson’s Bay store, Calgary, in 1930. This show included many of the paintings he had done that summer also a canvas “Lake of the Hanging Glaciers” which he had completed in 1928 and exhibited in the Paris salon in 1929. In the show as well, were a number of paintings completed in Victoria, B.C. which were used as illustrations for a publication presented by the C.P.R. and purchased later by J. Murray Gibbon.

In the the years that followed Leighton exhibited many times in Calgary, Edmonton and in other cities in Canada. He became a member of the Canadian Society of Painters in Watercolour in 1930 and himself founded the Alberta Society of Artists in 1931. By 1934 he had attracted the attention of the Toronto Saturday Night who carried the news that he was holding summer art classes for selected art students, from the Province of Alberta, at the Brewster Dude Ranch near Banff. This same year he had the unusual distinction of having three of his watercolours accepted for showing at the Royal Academy Exhibition in London, England.

In 1935 he was elected Associate of the Royal Canadian Academy. In 1936 an exhibition of one hundred of his watercolours was on view at the Fine Art Galleries of the T. Eaton Company, Montreal, including scenes which he had also done in Britain. The Gazette in review of the exhibition noted, “The charm of the picturesque has much to do with the appeal of his windmills, his old buildings and boats, his bridges and castles… He has brought his appreciation of the colorful to Canada, too, and he shows in a romantic light the dry docks at Vancouver, the ferry there, an old paddle wheeler at New Westminister, and even the grain elevators of the prairies… he is able to do justice to the Rockies, and his views of Cathedral Mountain, Mount Assiniboine, the Crow’s Nest Pass, Floe Lake and Tumbling Glacier, are notable for a bulk and solidarity that are not always found in watercolours.

Whatever his subject, whether castle or windmill, Sussex village or ridge in the Rockies, Mr. Leighton builds it up into a substantial well-integrated design and he does it with an uncompromising line and a sureness of colour. Leighton did a number of oil paintings were produced in The Studio, The Sphere of London, England, and in La Revue Moderne of Paris. He had completed paintings for English Railways, Vickers Limited (London,Eng) as well as the C.P.R.; illustrated two books Far Horizons Sketch Club, given lectures on art appreciation for the University of Alberta also on art and industry.

He remained head of the art department of the Provincial Institute of Technology and Art until 1938 when he retired. He spent several years in Brittain then settled on a ranch near Midnapore south of Calgary.