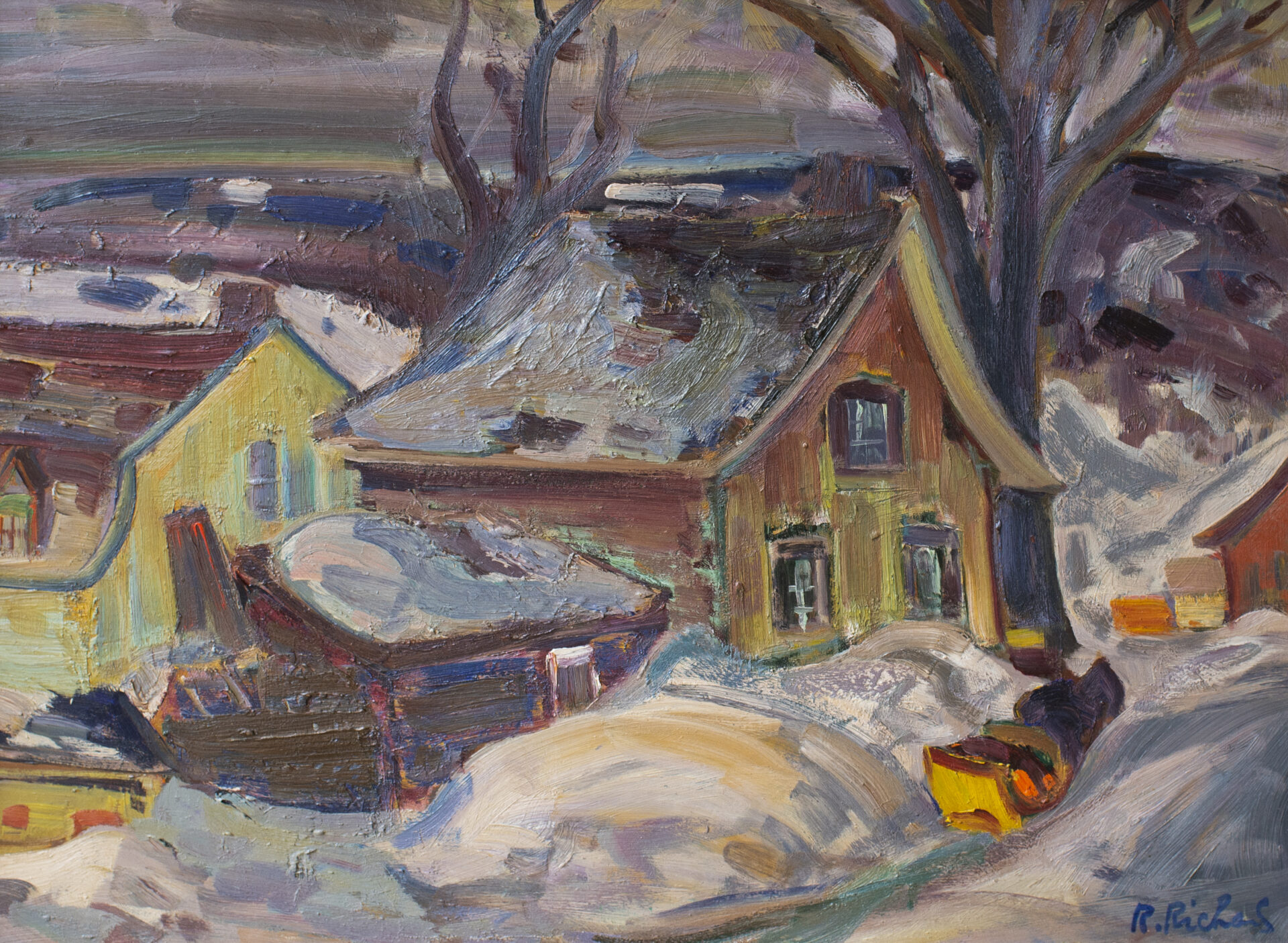 Born at Chaux-de-Fonds, Switzerland, his mother had come from a family of artists and his father was an engraver who sought new opportunities in Canada. They came to Montreal, Canada, where they lived for a few years and where Rene received his elementary education. The Richards then moved to north…

Born at Chaux-de-Fonds, Switzerland, his mother had come from a family of artists and his father was an engraver who sought new opportunities in Canada. They came to Montreal, Canada, where they lived for a few years and where Rene received his elementary education. The Richards then moved to north western Alberta at Cold Lake, where Rene’s father established a general store and trading post. Rene worked for his father at different times until he was twenty-eight. He supplemented his living by trapping. In his early teens he made his first trips into the bush. By 1923 he had paddled his canoe down the Mackenzie River to the shores of the Arctic Ocean where he had joined groups of Indians and Eskimos in various hunting expeditions. He remained in the north for about three years during which period he found himself picking up bits of birch bark and making crude sketches with burnt twigs. His appreciation of the wonderful sights in the northern landscape, bathed in the varying light, further enhanced by the skies painted with nothern lights, gave him the desire to record what he saw and to become an artist. He realized he had to save money to study art and set to trapping with great determination. He caught the white fox (valued for its fur) on the barren lands near the western Arctic Ocean. He returned south laden with enough furs to raise $3,000. He next approached his brother, Paul-Jean Richard, a former student of the Sorbonne, Paris, for advice. His brother, now a professor of French at the University of Winnipeg, gave him the name of Pierre Dupuy, a member of the Canadian Legation in Paris. Rene arrived in Paris in the autumn of 1927. He went to the Legation where he found Dupuy. Dupuy in turn placed him in the able hands of Clarence Gagnon. Gagnon advised him to go out into the streets and parks of the city to paint those things that interested him most and return to him for criticism. Richard spent most of his three years painting and receiving criticism from Gagnon learning and progressing greatly. He visited galleries and museums and studios of established artists. When his funds were exhausted, he applied for a student bursary at one of the art schools but was turned down because of his age (30 years) and was obliged to return to Cold Lake, Alberta, in 1930. There were few jobs to be had so Rene spent the next four years working in mining camps in northern Manitoba while painting whenever he could. In the summers he journeyed by canoe to distant points for instance down the Churchill River to Hudson Bay. Another trip took him 500 miles along the Saskatchewan River through 50 rapids by raft. His experiences as a hunter, trapper and voyageur would make good material for a book.

In 1940 on the suggestion of Clarence Gagnon, he settled at Baie St. Paul, Quebec, where he met and married Blanche Simon, one of Quebec’s finest and most original designers and weavers. They lived in the old Simon homestead where Blanche became Rene’s most valued and faithful critic. From Baie St. Paul, Richard set out on many more trips this time to various parts of Quebec including Ungava at the Chubb Crater and elsewhere in Canada as well. Viewing his work in 1945 The Gazette critic noted, “The collection reveals him as a painter of directness and force with a good color sense and skilled in arranging his pictorial material. In the main his subjects are handled in a broad, sweeping manner, his vistas are wide, his mountains are solidly based and the impresion of open air is convincingly con- veyed. These works express the love this artist has for the open country, and he has seen much of it of differing kinds for, prior to settling at Baie St. Paul and marrying Blanche Simon, he made many trips along the Mackenzie and Saskatchewan rivers, painting as far north as Lake Winnipeg and James Bay. To those who like nature in the rough these paintings should appeal …. His work in charcoal, tinted paper being employed, shows a real liking for this medium. The line is crisp, the masses well placed and skill is shown in eliminat- ing non-essentials. The subjects of this group range from Northern Alberta to Charlevoix. In a sketchier manner he successfully employs crayons . . . .”